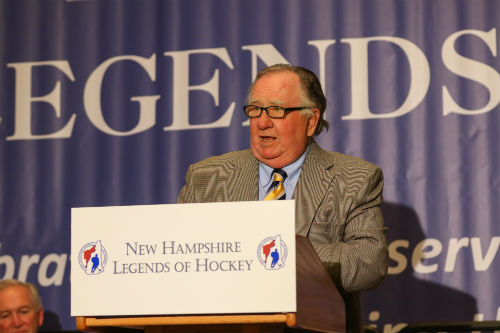 Master of Ceremonies, Bob Norton, and the New Hampshire Legends of Hockey Board of Directors inducted seven new members into the New Hampshire Hockey Hall of Fame class of 2017, in front of a crowd of more than 260 family members, friends, dignitaries and guests.

The Hall of Fame Induction Ceremony & Luncheon was presented by Cusa Consulting, LLC of Hampton, NH and was held on October 22, 2017 at the Grappone Conference Center in Concord.

It marked the NH Legends’ sixteenth year hosting the event and the Legends also paid tribute to Men’s and Women’s team from New England College.

Inducted into the 2017 Hall of Fame Class were five players: The late Maurice Couture, Jim Griffin, Roger Letourneau, the late Wayne Pecknold and the late George Thurston. Howell P. Campbell is being inducted posthumously as a coach; and Clarence T. Lessard is being inducted posthumously as a builder. To view the entire induction program click here. 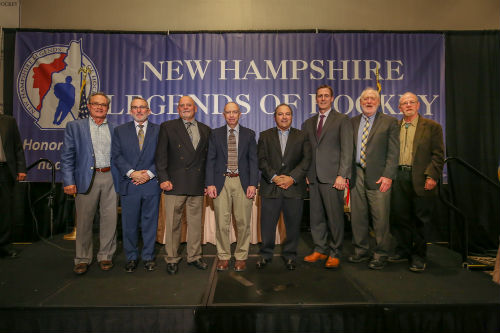 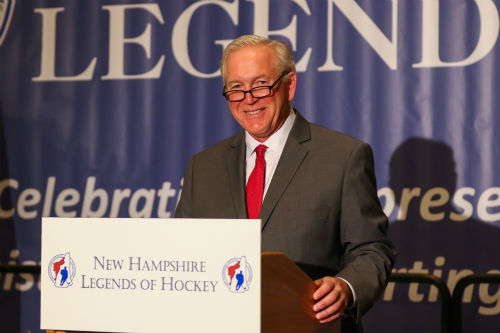 John Normand, (shown Above) current President of the Legends’ Board of Directors, welcomed the large audience and thanked them for supporting the 2017 Hall of Fame inductees and the New England College men’s and women’s hockey programs. Normand offered special thanks to Cusa Consulting (Mark Thurston) as the Presenting Sponsor; St. Paul’s School (Mike Hirschfeld) as the Luncheon Sponsor; NH Amateur Hockey Association (Paul Comeau) as the Title Sponsor and New Hampshire Distributors (Chris Brown) as the Social Hour Sponsor.

Normand also thanked the 25 other sponsors who helped make the Hall of Fame ceremony possible through their Gold, Silver, and Bronze-level sponsorships. Those sponsors are: 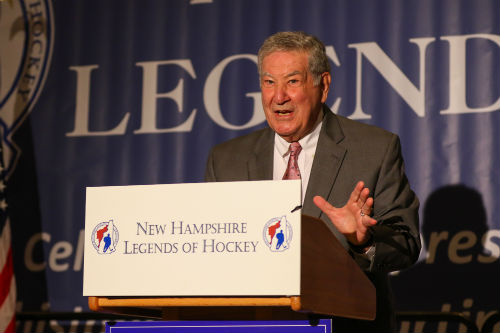 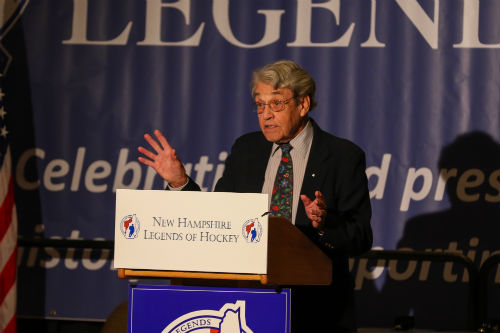 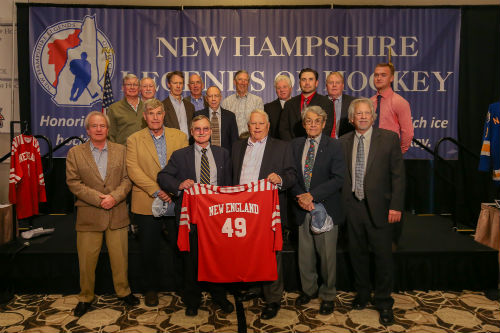 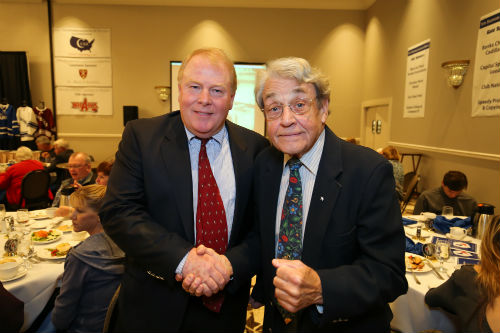 The jerseys shown above were auctioned at the ceremony. There are six jerseys still available and if you are interested in purchasing one, please email hayes743@comcast.net Jerseys can be adorned with a number of your choice and are $95.00 each. Shipping is not included.

Concord Mayor, Jim Bouley, extended a welcome on behalf of the Capital City and briefly traced the history of ice hockey in the City of Concord, from the first hockey game played in 1883 at St. Paul’s School to the more recent Black Ice Pond Hockey Championship at White Park. Bouley remarked that the Black Ice event will be held at Concord’s White Park again this year in late January. 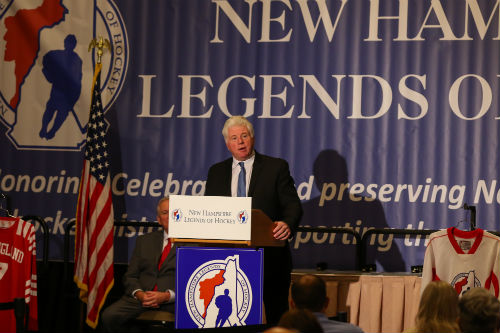 The Key Note Speaker was Red Gendron current Head Coach of the UMaine Black Bears. Gendron, a Berlin native, and twice had his name engraved on the Stanley Cup with the NJ Devils. Gendron is a New England College alum of 1979, Legends Hall of Fame Class of 2007, and is in his fifth season as head coach at the University of Maine. 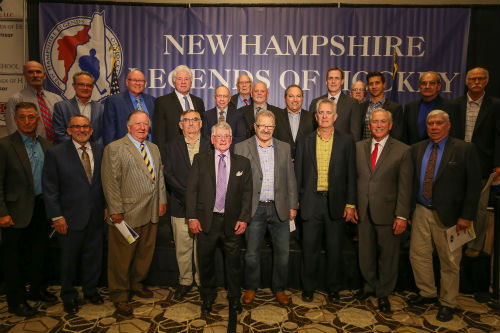 President John Normand announced the team that will be honored during the 2017 Hockey Hall of Fame Ceremony.

MRYHA (Manchester Regional Youth Hockey Association) will be honored at the 17th Hall of Fame Induction Ceremony which has a tentatively scheduled date of Sunday October 21, 2018.

John recognized all the Past-Presidents in attendance for their outstanding leadership and service. Shown below is Roland Olivier, John Normand, Dick Boucher, Tom Champagne and Roland Martin. 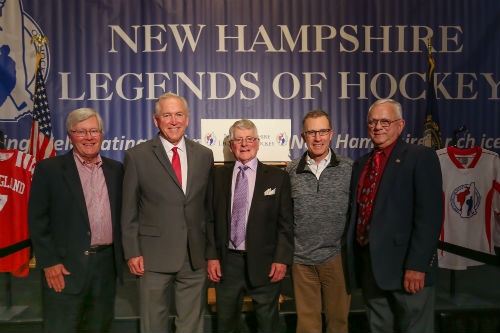 So again mark your calendar for the 17th Annual Induction Ceremony tentatively slated for next October 21st at the Grappone Conference Center in Concord. If you’d like to become a sponsor, please email hayes743@comcast.net or call Jim Hayes at 603-731-4168.

2018 Nomination with appropriate documentation can be submitted on-line beginning January 1 and continuing through the end of February.

Tickets Now on Sale - Through October 15