Five New Members Join the Hall of Fame in 2013

Master of Ceremonies, Bob Norton, and the New Hampshire Legends of Hockey Board of Directors welcomed five new inductees into the New Hampshire Hockey Hall of Fame, as a crowd of more than 280 family members, friends, dignitaries and guests looked on. The Legends also paid tribute to Concord High School’s Boys’ and Girl’s ice hockey programs and their tradition of excellence, including 8 State Championships. The Hall of Fame Induction Ceremony was held on October 27, 2013 at the Grappone Conference Center in Concord and marked the NH Legends’ twelfth year holding the event.

Greg Moffett, current President of the Legends’ Board of Directors, welcomed the large audience and thanked them for supporting the 2013 Hall of Fame inductees and the Concord High hockey program. Moffett offered special thanks to Bauer Hockey, the Presenting Sponsor of this year’s Hall of Fame Ceremony, for its continuing support of the Legends’ mission, and he praised this year’s Co-Title Sponsors, St. Paul’s School and Vachon Clukay& Company, PC., for their significant financial contributions. Moffett also recognized New Hampshire Distributors, Inc. which again hosted the pre-event Social Hour, and thanked the 27 other individuals and businesses who helped make the Hall of Fame Ceremony possible through their Gold, Silver, and Bronze-level sponsorships. 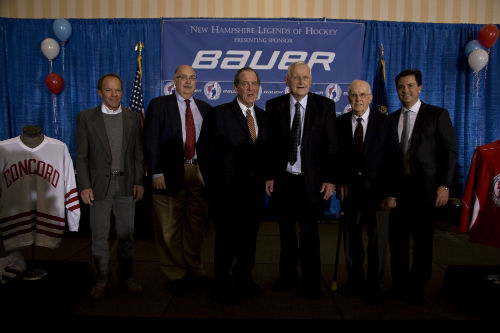 The Honorable Governor Maggie Hassan congratulated this year’s Hall of Fame inductees and praised them for their significant accomplishments and achievements. The Governor spoke of her appreciation for the game of hockey and the team-building skills and self-confidence it promotes. She also spoke directly to the current members of the Concord High Girls’ Hockey team who attended and encouraged them to reach for the sky. Governor Hassan concluded her remarks by providing State of New Hampshire Citations for each of the 2013 inductees.

State Senator Lou D’Alessandro, longtime Legends supporter and a former Board member, delivered State Senate Resolutions, honoring each of the members of the Hall of Fame Class of 2013. Concord Mayor, Jim Bouley, extended a welcome on behalf of the Capital City and briefly traced the history of ice hockey in the City of Concord, from the first hockey game played in 1883 at St. Paul’s School to the more recent Black Ice Pond Hockey Championship at White Park. Bouley remarked that the Black Ice event will be held at Concord’s White Park again this year in late January, and he encouraged everyone to participate. 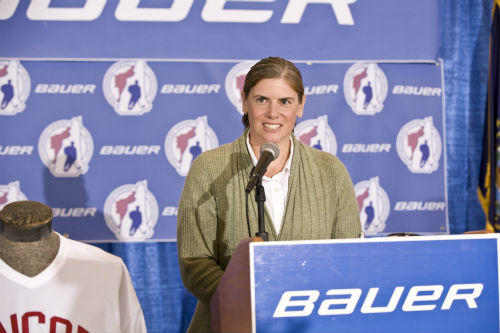 Keynote speaker, Tara Mounsey,  a two-time Olympic ice hockey medalist and former Concord High standout, recalled her early days playing in the Concord Youth Hockey system and of the various parents, coaches, and friends from within the Greater-Concord community and across the state who influenced her outstanding hockey career. Mounsey, who is currently a Nurse Practitioner, spoke of the valuable relationships she’s developed through hockey and of the life-lessons hockey taught her along the way. Mounsey also praised the current Concord Girl’s Hockey Coach, Stacy Boudrias, and offered that the Concord High Girls program is poised to do great things in the future under Coach Boudrias’s leadership.

The Legends recognized the Concord High School Crimson Tide, whose boys’ team played its first season in 1933-34 and has won 8 State Titles between 1977 and 2010. Concord High teams have competed in 19 State Championship Title Games. During the luncheon, attendees were shown a video tribute to the Crimson Tide boy’s and girls teams, recapping various Concord High victories.

Duncan Matthews, former Boys’ Coach at Concord High, recounted his days growing up across the street from Concord’s White Park, watching players like Rusty Martin play on the White Park Pond in the early 60’s. Mathews recalled his days as the Captain of the Crimson Tide hockey team in 1969-70 and, eventually, coaching CHS for two years. Matthews had special words of praise for Concord High’s current boy’s hockey coach, Dunc Walsh, and his string of successes behind the bench.

Concord High School principal Gene Connolly thanked the Legends for honoring their school this year and for recognizing the great ice hockey tradition of the Crimson Tide. President Moffett presented Mr. Connolly with a replica jersey from Concord’s first Championship season in 1976-77. Connolly thanked Moffett and the Legends for the gift, which he said will be placed in the School’s trophy case. 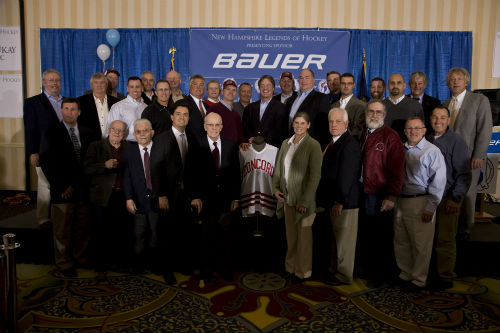 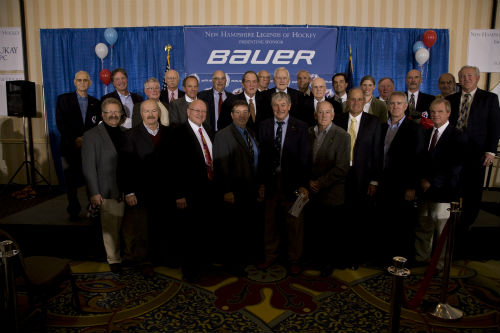 Executive Director Jim Hayes announces the team that will be honored during the 2014 Hockey Hall of Fame Ceremony. “In 2014, the Legends will be honoring a school whose Boy’s team has long been a cornerstone of Division I Hockey. This school began playing ice hockey in 1933 and is celebrating its 80th year of competition this year. In addition, this school’s Girls’ program, founded in 1987, is entering its 27th year of play. The school’s Boys’ teams have competed in 15 NHIAA State Championship games, winning 8 of them, and its Girls’ teams have won 5 of 6 NHIAA Championships. Of note, the Boys’ first NHIAA State Championship was in 1970, when they became the first team other than Notre Dame (of Berlin) and Berlin High School to take the crown. With us today, are six (former) players of the two teams, including their two Head Coaches and their wives: John Dodds and (Hall of Famer) Dick Dodds, of Hanover High School. It’s my pleasure to announce the Hanover High School Mauraders as next year’s honored team. Please help me give a warm welcome to the Marauders of Hanover.” 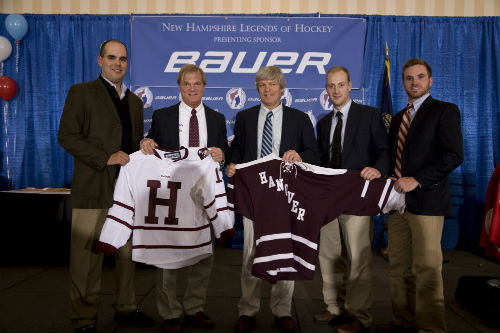 All photographs at our event taken by Defining Moments Photography will be posted on their website at a later date after December 15th. Go to www.definingmomentsphotonh.com and click on On-Line Ordering, to view or purchase photographs. You may purchase individual photographs or the entire CD with all the images, including copyrights for $50.00. Accepted cards are VISA, MC and AMEX.

In addition, DVD’s of the Induction Ceremony as well as Interiews may be purchased for $15.00 through Spotlight Video Productions, Hooksett, NH. Contact David Pearl at www.videonh.com or email info@videonh.com. Copies of the Concord High Hockey Tribute will be available for $10.00.

Mark your calendar for the 2014 Hall of Fame Induction Ceremony scheduled for Sunday October 26, 2014 at the Grappone Conference Center in Concord.