PITTSBURGH – Three weeks before the Connecticut neighbors Yale and Quinnipiac met on college hockey’s biggest stage, they played on a much smaller one in the ECAC Hockey tournament’s consolation game. Quinnipiac won that day, just as it had in the teams’ two meetings during the regular season.

But on Saturday at Consol Energy Center, in what was possibly the unlikeliest title game in N.C.A.A. hockey history, Yale claimed an improbable championship by beating the Bobcats, 4-0.

Yale captain Andrew Miller stopped a reporter when he asked what it felt like to be the final school to make the 16-team when the NCAA hockey tournament began.

Actually, we were the 15th seed,” Miller said.

And ultimately, the last one standing.

Miller capped his brilliant career with a breakaway goal in the third period, Jeff Malcolm stopped all 36 Quinnipiac shots and the Bulldogs won their first NCAA championship with a 4-0 victory Saturday night.

It was sweet revenge for Yale (22-12-3), which lost the three previous meetings with the top-seeded Bobcats by a combined 13-3. The nation’s oldest hockey program, however, left no doubt in the final, riding the play of Malcolm and some unlikely offensive contributions to capture a title 117 years in the making.

The Bulldogs have been playing hockey since 1896 but had only made the tournament twice before Allain took over in 2006. The Yale graduate accepted the job with the promise from his bosses the school would do what it takes to be competitive. In seven seasons he guided the Bulldogs all the way to the top.

“I came back to prove you could go to the best university in the world and prove you can play hockey at the highest level,” Allain said.

Yale did it throughout the tournament, knocking off three No. 1 seeds, including its Connecticut rivals from just down the street. Quinnipiac (30-8-5) – located less than 10 miles from the Yale campus – spent most of the year ranked No. 1.

The Bobcats (30-8-5) hardly looked like it after Yale’s Clint Bourbonais redirected a shot between goalie Eric Hartzell’s legs with 4 seconds left in the second period and freshman Charles Orzetti scored his first goal in four months 3:35 into the third to make it 2-0.

Miller, the tournament’s Most Outstanding Player, then broke loose and flipped a backhand by Hartzell for his 18th goal of the season. Pittsburgh native Jesse Root added an empty netter to set the coronation in motion.

“You’ve got to play your game,” Miller said. “We had some great players on our team. A lot of guys that don’t get noticed, they’re our heroes.”

Hartzell stopped 27 shots, but the Hobey Baker finalist let in a couple of soft goals that gave Yale all the momentum it would need.

“I thought we were the best team in college hockey for the season,” Quinnipiac coach Rand Pecknold said. “Unfortunately, we didn’t prove it tonight.”

The Bobcats dominated the season series, sweeping all three meetings by a combined score of 13-3. Quinnipiac trailed for all of 18 minutes in the three games combined and Hartzell allowed only one goal in the previous eight periods against Yale.

Yet Pecknold insisted the Bulldogs weren’t the same team the Bobcats steamrolled 3-0 three weeks ago in the ECAC tournament consolation game. Yale tripped up national powers Minnesota and North Dakota to make the Frozen Four for the first time since 1952, then edged UMass Lowell 3-2 in overtime in the semifinals Thursday.

On the biggest stage, the Bulldogs finally put it together behind Malcolm.

The senior celebrated his 24th birthday by keeping the tournament’s highest-scoring team at bay, including a crucial 5-on-3 penalty kill in the second period that kept the game tied. The Yale fans serenaded the goaltender with “Happy Birthday” during one stoppage in play, and Malcolm responded by taking turning away Yale’s nemesis one breathtaking stop at a time.

The clock winding down late in the second period, Young flipped what appeared to be an innocent shot from just outside the left circle. Bourbonais slapped his stick on the ice just as the puck rolled past him a few feet in front of the crease. The change of direction sent the puck between Hartzell’s legs to give Yale an unlikely lead and a major boost heading into the final intermission of the season.

Quinnipiac attempted to respond early in the third, flying around the Yale net in the same way the Bobcats overwhelmed St. Cloud State on Thursday. Malcolm, in perfect position nearly every time, maintained his composure.

His teammates repaid his hard work with another unlikely goal. Orzetti, a freshman who hadn’t scored since Dec. 8, streaked down the left wing and fired a shot at Hartzell. The rebound trickled to Hartzell’s right and Orzetti slammed home his own rebound between the goalie’s legs to give the Bulldogs a 2-0 lead.

The soft goals were uncharacteristic of Hartzell’s outstanding season. Yet they counted anyway.

“Without Hartzy we’re not here, we don’t go to the Frozen Four,” Pecknold said. “He was awesome all year for us.”

Just not in the final 21 minutes of the season.

Miller, who scored in overtime in the semifinals against Lowell, broke through 9:06 into the third to make it 3-0. The Bobcats panicked, pulling Hartzell with 7:19 remaining.

The ploy lasted all of 20 seconds. Root delivered the puck into the empty net and drained any drama out of the final 7 minutes. Confetti rained down at the final horn as the Bulldogs mobbed Malcolm in celebration.

“In the NCAA tournament anybody can beat anybody,” Miller said. “Whoever has the hottest goalie, best team game wins.” 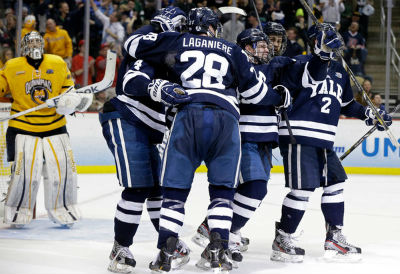 It appears wherever Dennis “Red” Gendron goes good fortune comes with him. As many New Hampshire residents recall, Red first began his coaching career in 1979 serving as the Assistant Coach for the legendary high school coach, Albie Brodeur at Berlin High. Two years later, Red accepted his first Head Coaching position at Bellows FreeAcademy in Vermont and promptly took them to two straight DI State Championships, four in all during his tenure.

In 1990-91 he became an Assistant Coach for the University of Maine Black Bears for Shawn Walsh. While there for three years Maine went to the Frozen Four twice, losing in the semi-final the first time against Northern Michigan in ’91 and capturing the 1993 National Championship against Lake Superior State.

In 1993 Red went to the professional ranks coaching for Lou Lamoriello and the NJ Devils organization. He won his first Stanley Cup in 1995 as an Assistant Coach for the Devils and later moved on to first be an Assistant Coach for the AHL Albany River Rats with the Devils and later Head Coach. During that period he won two more Cups with the Devils organization in 2000 and again in 2003. In 2004 he decided to coach in the USHL and initially was Asssitant and eventually Head Coach in Indianapolis. But in 2005 Red made his return to the college ranks, coaching alongside legendary Toot Cahoon at UMass Amherst through the 2010-11 season.

Two years ago, Red relocated to New Haven Connecticut. That brings us to where he is today, playing an integral part as Associate Head Coach for the Yale Bulldogs as 2013 National Champions.

His primary duties as Associate Head Coach include coaching the defense as well as the power play for the Bulldogs. This morning Red told me he was in the process of returning the many congratulatory texts and emails he received after the game Saturday night. From the Legends to you, congratulations Red!

Even though surely disappointed on the end result, what a season it was for Bedford’s own Rand Pecknold, Head Coach of the Quinnipiac Bobcats. He’s brought their program to prominence over the past 19 seasons. For his carrer for the Bobcats, this year was his 17th straight winning season. His teams have posted 20 win seasons 15 of 19 year including 30 this year ending up at 30-8-5 overall. Rand moved up on the top 10 List of Active All-Time DI Wins with 367 overall. Congratulations to Rand Pecknold and his entire staff and players for an outstanding year.