NH Legends of Hockey, Bauer Hockey Donate 30 Sets of Equipment to Local Associations – Support Geared Toward Goal of Continuing to Grow the Game in NH 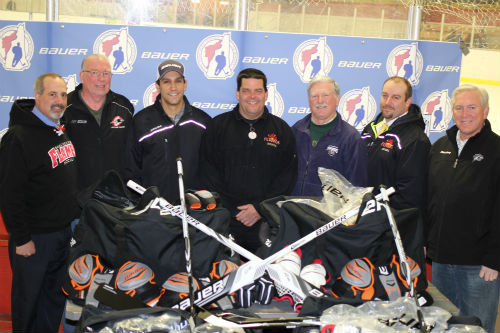 “Hockey has such a rich history in New Hampshire, from the first organized hockey game played in the U.S.at St. Paul’s School in 1883, to the expansive hockey landscape that exists here today for players of all skill levels,” said NH Legends of Hockey President Gregory Moffett. “We’re proud to be partnering with Manchester and Berlin Youth Hockey to help continue NH’s hockey tradition and attract even more kids to this great sport. With these two communities as our starting point, we hope to expand this effort in the coming years to support youth programs in other parts of the state.”

The donation, having a retail value of approximately $12,000, will help to grow the game of hockey in the Granite State by providing equipment to kids who want to try the sport and participate in learn-to-play programs. The equipment presented today includes a variety of sizes for kids aged 5 – 10 and includes goalie equipment for those wanting to play net.

The equipment will be made available in Manchester at West Side Arena and in Berlin at Notre Dame Ice Arena. These learn-to-play programs will be locally administered by the MRYHA and Berlin Youth Hockey Association.

“As MRYHA’s Mite Director, one of my main priorities for my organization is to grow the game, which starts at the youngest of levels. In order for us to be successful, we need to move to different, non-traditional demographics in our society and offer children who are not brought up around hockey a chance to play this great game. With this help from Bauer Hockey and the NH Legends of Hockey, we can now reach out to children and families in our community who may not have given hockey a chance,” said Brian Caldwell of MRYHA.” Our program was once one of the largest not-or-profit hockey organizations in the country, and we are celebrating our 50th anniversary next year, making us one of the oldest as well. We’re looking forward to expanding this to many more families next season.”

The NH Legends’ equipment donation program is made possible through its partnership with Bauer Hockey, a New Hampshire company with its global headquarters in Exeter. Bauer Hockey has been a long-standing sponsor of the NH Legends and has notched another assist by helping to provide the new gear.

“As a New Hampshire company we’re happy to support this local initiative and help grow the game in communities around the Granite State,” said Tory Mazzola, Global Communications Manager for Bauer Hockey.

Five New Members Join the Hall of Fame in 2013

Around the Boards - Supporters Update and NE Hockey Journal