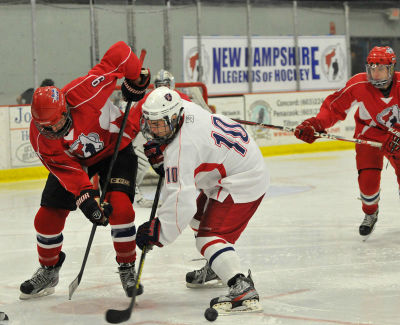 2013 Senior All-Star Game in Concord. Shown battling for the puck is # 9 Eathan Pollack of Memorial with #10 John Gomes of Londonderry.

The two teams were selected by the Coaches Association from Divisions I, II and III. Each team used all three goaltenders: For White, Brett Glendye of Merrimack started the game before giving way to Nic Phair of Salem and then to Matt Marchman of Pinkerton. Kurt Mitchell of Bedford (White) broke the scoreless tie in the middle frame on assists from Chris O’Hara and Cullen Willey, both of Bedford. Netminders for the Red All-Stars were starter Ryan Slatky of Trinity, Brennan Young of Oyster River and James Montgomery of Hanover. Ryan Sullivan of Winnacunnet scored late in the contest on assists from Eli Cobb of Dover and Chris Lovell of Bishop Guertin.

From these players, the Coaches Association will select one team to represent New Hampshire in the Annual Make A Wish game and players will be notified by the coaches. However, when we receive the announcement, we will send out an enewsletter. The game is scheduled for Saturday July 13, 2013 and will be played at the University of Vermont in Burlington. Teams will wear the NH of Legends of Hockey uniforms which were worn in Concord. 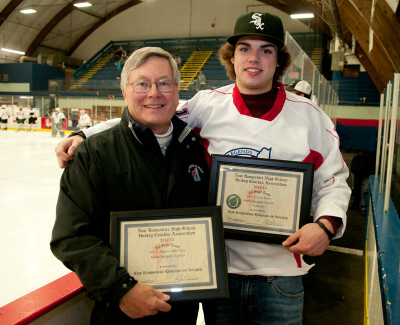 Legends President Roland Olivier congratulates Austin Sprague of Central. Olivier presented Austin with his First Team All-State Award along with the Player of the Year Award for Division I from the NH Legends of Hockey. The All-State Awards were selected by the High School Coaches Association.

In addition, exact replica Kamazu jerseys worn in today’s’ game (shown in top photo) are available for purchase through Brine – ESC Team Sports here in Concord for the players in both games. Jerseys are available in RED version only, with the number of your choice and name plate on the back. Order must be placed after Wednesday 20 and before Saturday, March 30, 2013. Go to Brine Everett Sports website after Wednesday at www.brineteamsales.com then click on the Brine Team Sales apparel site. For reference, sizes worn in today’s game were as follows: 1,30,31 All Goalie Cut; 2-11 XL and 12-21 L. Cost of the jersey is $82.00 plus shipping if necessary. Use CC or your paypal account. If you have any questions, call Bob Palisi at 603-228-5976 ext. 204 or 603-231-1446.

Division III Senior All-Star Classic
On Saturday afternoon the 7th Annual Division III Senior All-Star Game was held at the Laconia Ice Arena. The game featured 26 seniors from nine of the twelve division III schools. Team North was made up of seniors from Berlin, Kennett, Moultonborough-Inter Lakes & Conval High School earned the victory 11-7 over team South made up of players from John Stark-Hopkinton, Souhegan, Belmont-Gilford, Laconia-Winnisquam and Kearsarge.

The game featured the normal three 15 minute periods as well as a skills competition before each intermission. In the six skills competitions events the teams played to a 3-3 tie. That 3-3 tie was included in the final score. This game was sponsored and hosted by Laconia Ice Arena.

New Hampshire Legends of Hockey
Consistent with its mission of preserving the history of ice hockey, and growing the sport of ice hockey, in New Hampshire, the New Hampshire Legends of Hockey “Legends” supports secondary school hockey by awarding certificates to New Hampshire high school and prep school All-State players and coaches of the year, and sponsors the Annual Senior All-Star Hockey Classic and Make-A-Wish games. The Legends also actively solicits historical, hockey-related artifacts for preservation and display to the general public. Late last year, the Legends launched their new online museum. This museum contains the state’s hockey history and heritage gathered from periodicals, game film, trophies, photos, uniforms, other clothing, etc. The museum is searchable by the number of fields such as team, player, jerseys etc. While there are several hundred photos currently available for viewing new ones will be added on a ongoing basis so be sure to check back frequently.