The NH High School Coaches Association (NHHSC) announced today their 2011-12 All-State selections for Girls and Boys Div. I, II and III. The NHHSC is comprised of high school coaches from across the state. Duncan Walsh, President of the NHHSC and Head Coach of Concord HS Hockey team said “we are pleased to continue our partnership with the NH Legends of Hockey”. For the second year, the Legends are providing framed certificates for each recipient.

The NH High School Senior All-Star Classic will be held Saturday March 17th at the Douglas N. Everett Arena in Concord beginning at 5:00 pm. The NHHSC selected two teams who will compete against each other. The Legends purchased jerseys and socks last year which will be worn for the game. Tickets may be purchased at the door. Ticket prices are $5.00 for Adults and $2.00 for students and seniors. In addition, players from this game will be chosen to compete in the Annual Make-A-Wish hockey game against a team from Vermont in July.

“Our organization is proud to support and celebrate the history and game of hockey in NH and wanted to do something to recognize these special high school athletes” stated Roland Olivier, President of the Legends.

“The NH Legends organization recognizes the important role high school hockey has played in the history of the sport in our state” said Jim Hayes, Legends, Executive Director. “In addition to supporting high school hockey with this donation, we also collected and made available on our web site results of all high school hockey championship games dating back to 1946-47 as well as coaching records.” 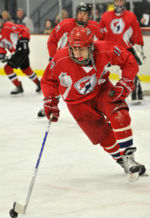 About New Hampshire Legends of Hockey
Consistent with its mission of preserving the history of ice hockey in New Hampshire, the New Hampshire Legends of Hockey actively solicits historical, hockey-related artifacts for preservation and display to the general public. Late last year, the Legends launched their new online museum. This museum contains the state’s hockey history and heritage gathered from periodicals, game film, trophies, photos, uniforms, other clothing, etc. The museum is searchable by the number of fields such as team, player, jerseys etc. While there are several hundred photos currently available for viewing new ones will be added on a ongoing basis so be sure to check back frequently.

No Replies to "All-State and Senior Game Recognition Announced"