Forty-two of the best high school seniors from Division I, II and III gathered for the Red White game. In the end, Team Red came out on top 5-3. They were led by Joe Libby of Trinity and Division II Player of the Year (“POY”) David Downie of Merrimack who each potted two goals. Kevin Murphy Division III POY netted the other goal. Team White started slow, going down 4-1 after one period but made a good game of it. White was led by a pair of goals from Eddie Conroy of St. Thomas and a single tally from Nate Philbrick of Bishop Brady. Each goaltender played one period. Team Red’s net was protected by Cam Anzel, Nick Dube and Tyler Fay while White’s netminding came from Drew Pearson, Tyler Briand and Andrew Civello. 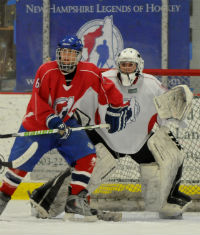 Players participating in the game will vie for roster spots for the Annual “Make a Wish” game in Burlington , VT. which will be held the weekend of July 13-15, 2012. The actual date and time is yet to be determined. Selected players will be notified by the Coaches Association by March 31st.

Prior to the game, NH Legends President Roland Olivier presented certificates to Player of the Year David Downie and Kevin Murphy as well as Coach of the Year certificates to Mike Connell of Trinity and Marty Myers of Division II Champion Bedford. Each of the All-State recipients in attendance received a framed certificate donated by the Legends. Other All-State recipients should receive their awards from their coaches in the next couple weeks. 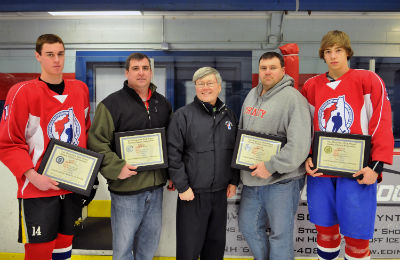 Photographs from the game were taken by Jim Paiva. Go to http://championphoto.zenfolio.com/all_star_classic/ to view and purchase photographs.

Exact replica jerseys worn in the [All-Star] game at available for purchase through
Brine-Everett Sports in Concord . Jerseys are available in red version only, with the number of your choice and name plate on the back. Order must be placed after Wednesday March 21 and before Saturday, March 31, 2012. Go to website after Wednesday at www.brineteamsales.com then click on the team sales apparel site.

“The NH Legends organization recognizes the important role high school hockey has played in the history of the sport in our state” said Jim Hayes, NH Legends, Executive Director. In addition to supporting high school hockey, NH Legends has also researched and documented the results of all high school hockey championship games dating back to 1946-47 as well as coaching records. Go to www.nhlegendsofhockey.com for more information.