Jamie Staton and the Legends B.O.D. welcomes Class of 2011

Despite the unusual October snowstorm, more than 310 people attended at the Grappone Conference Center in Concord, NH Sunday October 30th as the New Hampshire Legends of Hockey held their 10th Annual Hall of Fame Induction Ceremony and Luncheon.

Roland Olivier, Legends President welcomed the gathering and thanked the large audience for attending the event and supporting this year’s inductees. He also welcomed several special guests and thanked the event sponsors. An update on the Legends organization was presented including the official launch of our new online museum. He also mentioned five Legends display cabinets with local hockey artifacts are located through out NH. Attendees were encouraged to become supporters of the Legends, watch for future communications and please look at the website. 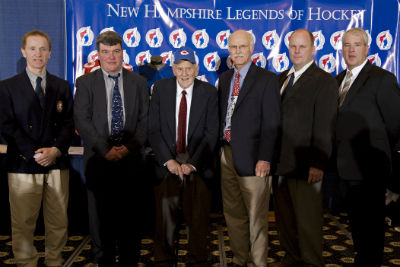 Guest speaker Jeff Serowik first directed his remarks to the class of 2011 by describing what it meant to him being inducted into the New Hampshire Hockey Hall of Fame in 2009. He then cited how the game of hockey has changed since he was playing in the NHL. He noted how much faster the game has become and the how the skill level has risen.

Here are the newest members of the Hall of Fame by category:

PLAYER CATEGORY:
Karl “Red” Adams of Concord, NH;
Adams played for Concord High School during the 1936-37 and 38-39 seasons. As a sophomore and junior, Concord High won two straight (unofficial) state championships, prior to the formation of the NHIAA. Adams attended UNH in September 1940 and starred in both hockey and baseball. Several of his highlights of his collegiate career was as a sophomore, the first year varsity player was selected to the All-Tournament team in the Lake Placid Tournament. He finished 4th in league scoring with 19 goals and 25 points and he was selected unanimously to the Globe All-New England first team. Adams returned to Concord after college and played for the fabled Sacred Heart Hockey Club culminating with a game against the 1952 U.S. Olympic team right here on Pleasant Street on Jan. 8th.

Dana Barbin of Exeter, NH;
Barbin played for four seasons for the Exeter High School Blue Hawks. As a junior helped them to the NHIAA State finals however the Hawks came up short 5-3 to Berlin. He served as captain his senior year and selected MVP. Dana attended UNH in the fall of 1977, primarily a forward, played four seasons for the Wildcats. As a sophomore he helped the Cats to the league championship. His senior year he was selected Co-Captain finished his career with 127 points in 125 games. Barbin is one of only three NH natives to score 100 or more points along with Frank Roy and Paul Thompson. Barbin went to play professional hockey in Denmark and Sweden seven seasons. Since 1992 has been the Head Coach for Philips Exeter Academy hockey team. Exeter won the New England Prep Championship in 1998-99 with a 30-3-0 record.

Ryan Brandt of Concord, NH;
Brandt attended the University of New Hampshire in the fall of 1966 playing on the freshman squad. He played the next three years on the varsity team with the Wildcats posting records of 22-7-0 in 1967-68; 22-6-1 in 68-69 and 19-10-2 record. His last two seasons he played for legendary coach “Charlie Holt”. During his senior year he served as the Captain and also received All-Tournament recognition. Ryan played both forward and defense during his college career. After UNH he played four seasons for the Concord Eastern Olympics in the New England Hockey League and later for the Concord Budmen in the late 80’s. He continues to skate in a senior league in Concord and has played on a 60+ team that has won the USA National Championship for the past three years. In addition, he coached for many years in Concord Youth Hockey and officiated high school, prep and Division III College for 5 years.

COACH CATEGORY:
Dunc Walsh of Concord;
Walsh attended Bishop Brady and played four seasons graduating in 1981. As a sophomore and junior Walsh helped lead the Green Giants to the NHIAA State Finals, however Brady came up short to Concord and Central respectively. He attended Plymouth State College and played four seasons there scoring 31 goals and 65 points as a senior, both PSC records. He was captain his junior and senior seasons and scored 137 points during his career, ranking him second all-time. Walsh was named Head Coach for Concord High School for the 1990-91 season, coaching the Tide for last 21 seasons. Walsh has coached the Crimson Tide to six state championships placing him second only behind the legendary Barney Laroche of Notre Dame. His overall coaching record is 364-116-14.

OFFICIAL CATEGORY:
Leonard “Red” Brochu (Died on June 18, 2007)
Always a physical presence, Brochu starred for Concord High School in the late 1940’s. His senior season of 1949-50 Brochu helped the Crimson Tide to the State Semi-finals before bowing to perennial Champion Notre Dame. He played for the Sacred Heart team in the early 50’s and the Concord Shamrocks in the early 60’s and finally with the Concord Coachmen. He along with others assisted founder Russ Martin to develop the Concord Youth Hockey program in 1959-60 at White Park. He helped coach CHS for one season and later coached Bishop Brady in the 80’s. Red’s large stature, 6’2, 250 lbs, enabled him as a referee to always be in control for of the on-ice action. He officiated from 1962-1979, usually between 90-120 games per season of youth, high school, Division II College as well as senior hockey. He served as the first Vice President of NIHOA (National Ice Hockey Officials Association) NH Chapter for two terms over four years in the early 70’s and served on several committees. When Charlie Holt (UNH Coach) was re-writing the collegiate officiating hockey book, he called upon Red for his expertise.

BUILDER CATEGORY:
Sandy Sistare (Died on December 22, 2008)
St. Paul’s School was founded in 1856 as a boy’s only school. St. Paul’s, known as the birthplace of U.S. hockey; the first organized games were played on the frozen Turkey Pond in the 1870s. St. Paul’s became co-educational in January of 1971, when the first 19 girls arrived. Sistare arrived at the prep school in 1968 as a member of the faculty and spent 22 years in Concord working as an educator, administrator and coach. According to Bill Mathews, current rector of St. Paul’s, Sistare was the driving force for starting girl’s hockey at St. Paul’s School. He was the perfect fit as the first girl’s hockey coach, teaching the players the basics of the game and strategy behind the plays as well as instilling in them a love of the game”. From its infancy as a club team in 1979 and continuing for eight seasons through the 1986-87 season. Sistare’s record was 59-29-3 for a winning percentage of .648%. St. Paul’s won the first Independent School Championship in 1986-87. In all, Sistare coached over 80 players, many who went on to play for Bowdoin, Brown, Harvard, Middlebury, Princeton and Yale to name a few and several captained their teams.

Master of Ceremonies Jamie Staton and the Board of Directors congratulated and announced each member of the Class of 2011 into the New Hampshire Legends of Hockey Hall of Fame. 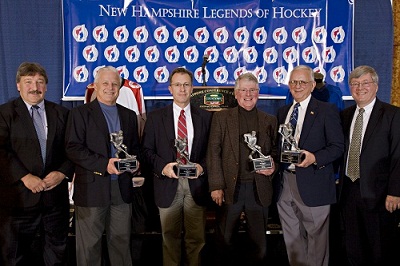 Manchester Monarchs President Darren Abbott congratulated the inductees from the Class of 2011. He also spoke of the close partnership that has developed between the Monarchs and the Legends and the New Hampshire Hockey Hall of Fame over the last 10 years.

Along with the new inductees, the Legends recognized the Sacred Heart (Sacre Coeur) Hockey Club of Concord who began play in January 1931 and concluded play after the 1951-52 season. Five of the nine remaining members of this team were in attendance and they shown in the photo below. Not in attendance were Gene Lauziere, Fats Hooley, Dick Ryerson and Jim Stohrer. Of note, 2011 Inductees Karl “Red” Adams and Leonard “Red” Brochu both played for Sacred Heart. 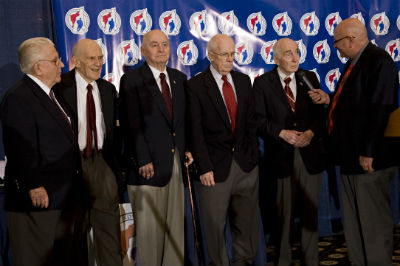 Jamie Staton read State Senate Resolutions from Senator Lou D’Allesandro for each of the inductees and a Commendation which recognized the Sacred Heart Hockey Club from Governor John Lynch. 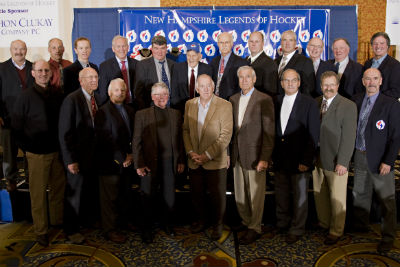 Executive Director Jim Hayes announced the team that the Legends will honor in 2012. He said “we have honored many great teams over our first ten years, and each played an important role in molding our state’s hockey history. The organization we will recognize next year, as selected by the Board of Directors played their first season in 1921-22, won their first of 9 State Titles on February 19, 1963 and their last on March 6, 1976. In total, they have competed in 28 State Championship Title Games. They won the New England Championship in 1967 – and were runner-up the following year. This season marks their 84th season of competition. Please give a warm round of applause for the Berlin High School Mountaineers and their alumni in attendance.”

Treasurer Mike Gould recognized the each of our sponsors who played a significant role in the success of our event and we would like to thank them.

All photographs taken by Defining Moments Photography at our event will be posted on the website through Jan. 15, 2012. Go to www.definingmomentsphotonh.com and click on On-Line Ordering, enter the word legends as the password to view or purchase photographs. You may purchase individual photographs or the entire CD with all the images, including copyrights for $50.00. Accepted cards are VISA, MC and AMEX.