Master of Ceremonies, Bob Norton, and the New Hampshire Legends of Hockey Board of Directors inducted seven new members into the New Hampshire Hockey Hall of Fame, as a record crowd of more than 350 family members, friends, dignitaries and guests looked on. The Legends also paid tribute to Hanover High School’s Boys’ and Girl’s ice hockey programs and their tradition of excellence, including a combined thirteen NHIAA State Championships. The Hall of Fame Induction Ceremony & Luncheon was held on October 26, 2014 at the Grappone Conference Center in Concord and marked the NH Legends’ thirteenth year hosting the event. 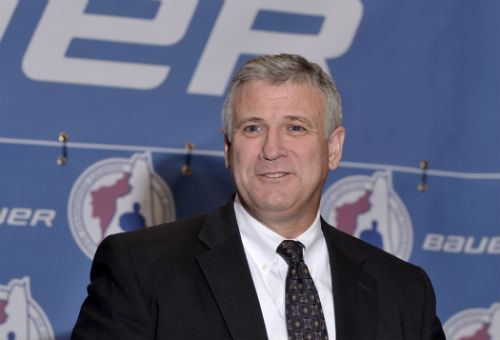 Greg Moffett, current President of the Legends’ Board of Directors, welcomed the large audience and thanked them for supporting the 2014 Hall of Fame inductees and the Hanover High hockey programs. Moffett offered special thanks to Bauer Hockey, whose Global Headquarters is in Exeter, NH. It marked the third straight year that Bauer has been the Presenting Sponsor of the Hall of Fame event, and Moffett thanked Bauer for its continuing support of the Legends’ mission. Moffett also recognized significant financial contributions from the Boston Bruins, the 2014 Luncheon Sponsor; Vachon Clukay& Company, PC. and St. Paul’s School the Co-Title Sponsors; and New Hampshire Distributors, Inc. which again hosted the pre-event Social Hour.

Moffett also thanked the 33 other sponsors (a record 38 number for the Hall of Fame event) who helped make the Hall of Fame ceremony possible through their Gold, Silver, and Bronze-level sponsorships. Those sponsors are:

Lastly, Moffett congratulated Past President Roland Olivier for his service for the Legends and presented Roland with a token of the boards appreciation.

A number of former Boston Bruins players — including Ray Bourque, Terry O’Reilly, Ken Linseman, Frank Simonetti and of course Keith Crowder – were on hand to see their former teammates, Rick Middleton and Bruce Crowder, inducted into the Hall of Fame. 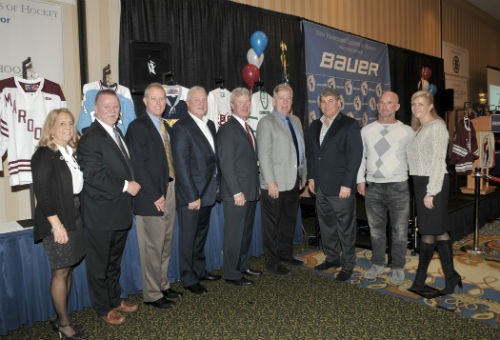 State Senator Lou D’Alessandro, longtime Legends supporter and a former Legends Board member, delivered a letter from The Honorable Governor Maggie Hassan and delivered State Senate Resolutions and State of New Hampshire Citations honoring the Hall of Fame Class of 2014 and the Hanover High Boy’s and Girl’s teams. 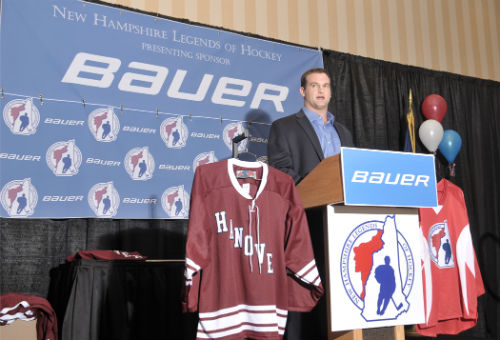 Taylor Chace, of Hampton Falls, NH, was the Keynote Speaker at this year’s Ceremony. He spoke of his days learning to skate with Jim Tufts “Learn to Skate” program at the Phillips Exeter Rink in Exeter, NH. The Tufts family has had a huge impact on youth hockey in the seacoast of New Hampshire and its grassroots programs.

Taylor was a standout New England hockey prospect when, at 16 years old and playing for Sean Tremblay and Chris Grassie with the New Hampshire Junior Monarchs, he suffered a traumatic spinal cord injury. Taylor spoke of how the injury changed his life, as he learned to live with his injury. Taylor described how met Tom Moulton, who introduced him to Rick Middleton and the sport of sled hockey. Taylor described how he regained his passion for hockey through the sport of sled hockey and was once again motivated to compete in athletics. Taylor has since represented Team USA at the 2006, 2010 and 2014 Winter Olympic Games, winning a Bronze (Torino Italy 2006) Gold (Vancouver, Canada 2010) and Gold (Sochi, Russia 2014). Today, Taylor continues to coach sled hockey with the Northeast Passage Sled Hockey Team out of the University of New Hampshire. Click here to watch 3:17 trailer for the upcoming PBS beginning November 10th, titled ICE WARRIORS – USA SLED HOCKEY.

The Legends recognized the Hanover High School Marauders, whose Boys’ team played its first season in 1933-34 and the Girls’ team, which began play in 1987. Click here to view Induction booklet. 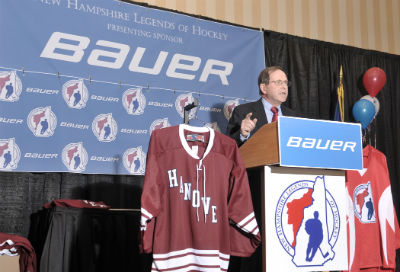 Jack Turco, former Boys’ Coach at Hanover High gave a brief recap on the history of the Hanover High Boys’ team which began play in the state in 1932-33 and was the first team outside of Berlin to win a state title in 1970. The Hanover Girls’ team started its successful tradition in 1987.

Paramount to the success of Hanover’s High School teams has been the development and continued success of a feeder program that develops the next generation of high school players. This program has been sustained by youngsters in Hanover learning to skate on Occom Pond, growing up watching and cheering for the Dartmouth College Women’s and Men’s Hockey Teams and, the continued success of a strong Youth Hockey program.

Finally, the Hanover community continues to embrace, support and nurture a strong high school hockey tradition. The entire Hanover community was particularly proud of Steve Shirreffs, Hanover High Scholl Class of 1994, and Princeton University Hockey All-American, being chosen this year to be inducted into the New Hampshire Legends of Hockey Hall of Fame since Steve represents all that is best in the long Hanover hockey tradition. 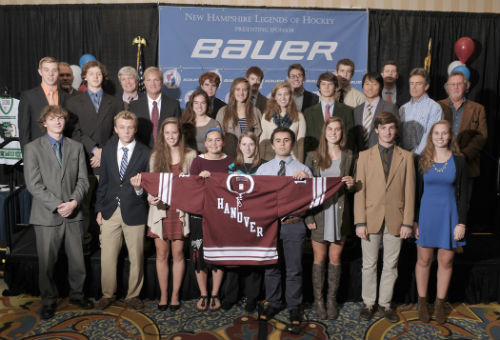 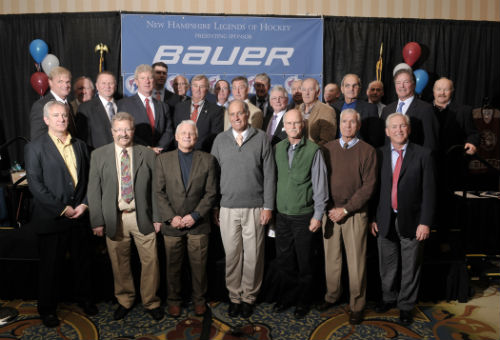 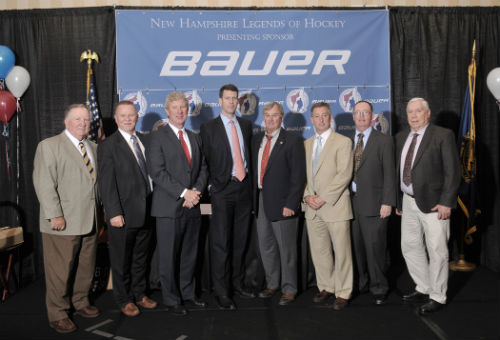 Executive Director Jim Hayes announced the team that will be honored during the 2015 Hockey Hall of Fame Ceremony. Next year, The Legends will honor the Nashua Royals, a team that began play in 1948. The Royals, whose first two captains were named Dionne, originally began play as a boys team, in the 16 to 21 age bracket, eventually becoming a men’s team. In 1952, the Royals beat the Rye Seahawks for the New Hampshire Amateur Class B title. The Royals were instrumental in the success of the Granite State Hockey League. In the 1960’s, they were coached by Ron Peters, Hall of Fame ’08. The Royals played in three straight GSHL Championships, winning in the 1965-66 season over the Tam O’Shanters of Manchester. Two of their top scorers were Buzz Littell, Hall of Fame ’06 and Pete Merrill in addition to the Legends own Leo Gould, Hall of Fame ’06. One of the Royals’ most notable players was Bobby Sheehan, who played for the team at age 16, and eventually went on to play for 14 years in the NHL for the Montreal Canadiens and several other teams. The Royals concluded play after the 1966-67 season. Hayes asked everyone to help him welcome next year’s honored team, the Nashua Royals.

So please mark your calendar for the 2015 Hall of Fame Induction Ceremony, scheduled for Sunday October 25, 2015 at the Grappone Conference Center in Concord and if you’d like to become a sponsor for next October, please email hayes743@comcast.net or call Jim Hayes at 603-731-4168.

As a reminder, on-line nominations for 2015 can be submitted beginning January 1 and continuing through the end of February.

Contact David Pearl at www.videonh.com or email info@videonh.com. Copies of the Hanover High Hockey tribute are also available for $10.00. DVD’s of the Induction Ceremony as well as Interviews may be purchased for $15.00 through Spotlight Video Productions, Hooksett, NH.

Photographs at our event were taken by Jim Paiva Photography and are posted on his website. Go to http://jimpaiva.zenfolio.com/, to view or purchase photographs. Accepted cards are VISA, MC, AMEX, and PayPal.

To view or purchase photographs taken by Jim Paiva Photography of the 2014 Golf Classic, go to: http://jimpaiva.zenfolio.com/2014_golf_classic/

No Replies to "Seven Enshrined into Legends Hall of Fame"