Exeter, NH – Last Saturday afternoon, at the Rinks of Exeter, the New Hampshire Legends of Hockey (“Legends”) hosted both Senior All-Star Classic Hockey games. The 1:00 pm game featured the very best players from Division I and II, while the 1:30 pm game was for Division III players only.

Seniors were selected by the New Hampshire High School Hockey Coaches Association. At the conclusion of each game, a reception hosted by the Legends took place in the lobby of the Rinks of Exeter for players and their families. Click here to view 1:00 Rosters and here for the 1:30 Rosters 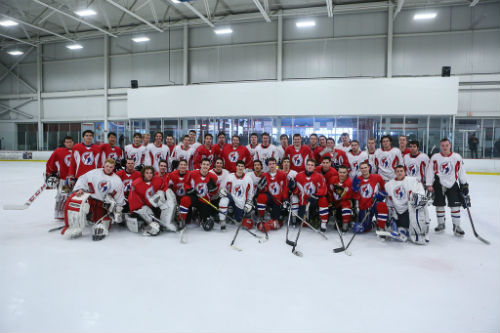 At the conclusion of each game, all Senior players were announced individually and received a certificate for their participation of the Senior All-Star Classic from John Normand Vice President of the Legends. 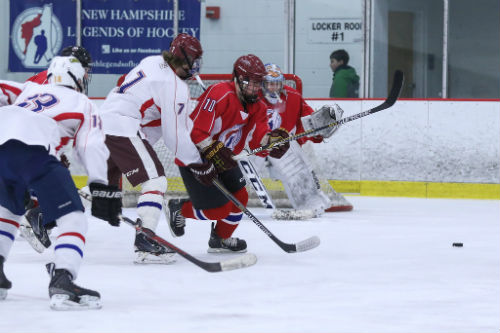 Those Senior players in attendance who had been selected for All-State recognition by the NH High School Hockey Coaches Association each received a framed All-State certificate from the Legends. 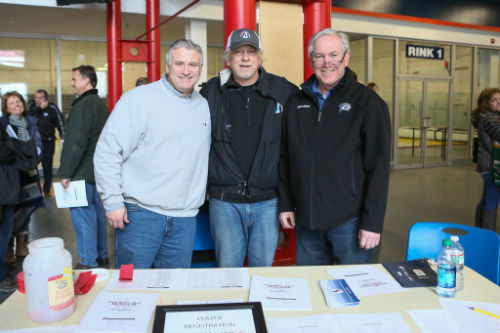 For the fifth straight year, the Legends provided framed certificates for each member of the various All-State teams. In addition, for each division, the Legends awards certificates to the Player-of-the-Year and Coach-of-the-Year. Click on each Division to view the list of this year’s All-State recipients for Girls, Division I, Division II and Division III. Certificates for those underclassmen and girls recipients not in attendance were taken by team mates or coaches in attendance for disbursement. 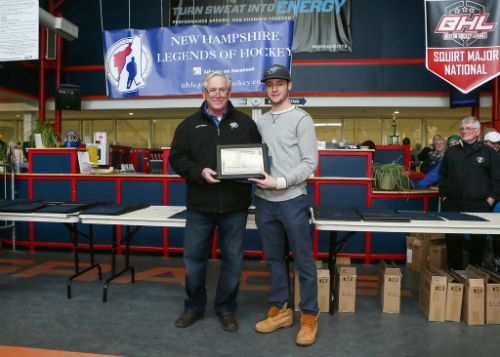 Participating players from only the 1:00 pm game were eligible to be selected by the New Hampshire High School Hockey Coaches Association for the Annual Make-A-Wish team. That game against Vermont is scheduled for June 26-27 at the University of Vermont. Those players will be contacted shortly. Click here to view roster. In addition, the list should be posted on the Coaches Association website.

Now for the game recap. Two large crowds of family members and friends watched the Red All-Stars and White All-Stars in the 1:00 pm game and light, dark in the 1:30 game. To view rosters, click team names to left.

A random drawing took place for each game and selected was Andrew Stevens from the first game and Erik Leger from the second. Each player won a Bauer composite stick of a standard stock pattern of their choice. They should contact our Executive Director Jim Hayes hayes743@comcast.net with their choice.

In the second period Kyle Svenson gave Team White the lead on assists from Soucy and Burgess. It didn’t take long to even the score as Kyle Nagri scored with helpers from Antkowiak and Monahan. White retook the lead on a goal from Devon Sprague with assists going to Jacob and Stephens. Team Red then scored three straight on goals from Dakota Pidgeon, Ryan Damren and Casey Glynn. Team White rebounded with a goal by Cam Crowley to close out the scoring after two periods with Red holding a slim 4-3 lead. Brandan Mackenzie made four saves for Team Red while Sam Macdonald stopped 8 for Team White.

In the third stanza, Brett Silva scored for Team Red assisted by Palker and Devito and late in the period The Red Team struck again as Jin Kim closed out the scoring for a 6-3 final score. Mike Doyan made 7 saves for Team Red in the third while Brendan Murphy stopped 5 for Team White. 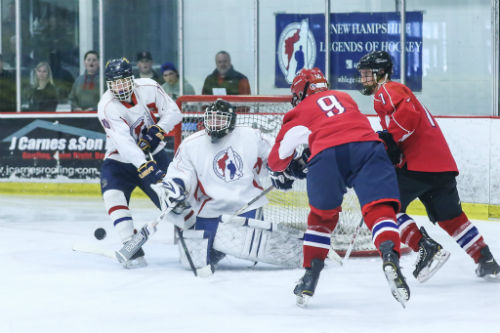 1:30 pm All-Star Game
The Dark All-Stars overmatched the Light All-Stars by the final score of 8-4. This game consisted of two halves with a skills competition at the break. In the first half, Team Light took a 3-2 lead into the break, Kyle Kolehmainen, Alec Medic and Matthew Pickman provided the goals while Team Dark had a pair of goals from Cooper Bourque. Brayden Harriman played the entire game and made 36 total stops while Bobby Davis stopped 15 for Team Dark.

In the second half, Andrew D’Amour struck first for Team Dark to even the score at 3 all. Less than a minute later, Tristan Rowe scored for Team Light to give them the lead again. However, another goal by D’Amour, two by Robby Moody and another by Zack Allard ended the day’s scoring. Josh Kondrat made 15 saves for Team Dark in the second half. 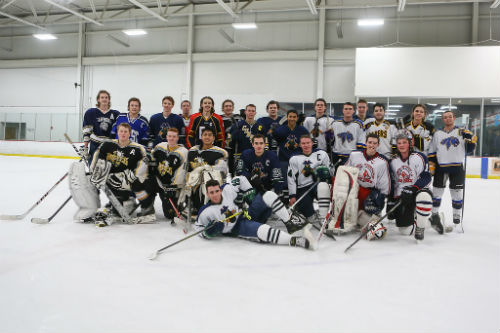 All photos were taken by Matt Parker Photos. To view all photos from the doubleheader, click HERE to view and or purchase.

“The Legends recognizes the important role high school hockey plays in the state’s rich ice hockey history,” said Jim Hayes, Legends Executive Director. “In addition to supporting high school hockey with various events, we have compiled and documented the results of all high school hockey championship games – and coaching records – dating back to the 1946-47 season.” To access this information, simply click on the High School Archives link at our website: www.nhlegendsofhockey.com.

The Legends actively solicits historical, hockey-related artifacts for preservation and display to the general public. The Legends online museum catalogs the state’s hockey history and heritage gathered from periodicals, game film, trophies, photos, uniforms, other clothing, etc. The museum is searchable by the number of fields such as team, player, jerseys etc. While there are several hundred photos currently available for viewing, new ones are added on a ongoing basis, so be sure to check back frequently. For more information on the Legends of Hockey, visit our web site at nhlegendsofhockey.com.