Thank you to everyone that supported our annual golf event. We are grateful to the players, sponsors and volunteers that help make this event better and more popular each year. Once again this year the weather was absolutely fantastic and it was a great way to spend time with our hockey family and friends.

Golfers received a welcome package, which included a two-pack of the best summer time insulated glasses around, the “16 oz. Tervis Tumbler” with the NH Legends of Hockey logo affixed. Golfers who arrived early were provided free chair massages prior to tee off by Andrea Kuhman of Arias Spa.

The event was kicked off with a message from Roland Olivier, President of the New Hampshire Legends of Hockey (NHLoH). He welcomed the players and thanked the volunteers and businesses that donated gifts for the “Legends Ultimate Raffle”, our 2011 Title Sponsor, Vachon Clukay & Company PC of Manchester, and the 27 other Silver and Bronze sponsors for their support. Roland also recognized individuals in attendance, representing our Hall of Fame.

Olivier mentioned the 2011 Induction Ceremony is slated for Sunday October 30, 2011 and will be held at the Grappone Conference Center in Concord. “Today, we have four of those individuals with us, in addition to Len Brochu, the son of Leonard “Red” Brochu (deceased) in the officials category. Other inductees in attendance are Dunc Walsh (Concord) in the coaches category, Dana Barbin, Ryan Brandt and Karl “Red” Adams (Concord) in the player category. The sixth member of the Class of 2011 is Sanford “Sandy” Sistare (deceased) in the builders category. We hope many of you can join us so look for future communications on this important event.

Roland welcomed and introduced the President of the Manchester Monarchs Darren Abbott. The Monarchs and the NH Legends will both be recognizing the Sacred Heart Hockey Club of Concord who played in the 30`s through the 1951-52 season. Three of the six team members who there in attendance were introduced to the crowd. They were Karl “Red” Adams, Tom Champagne and Barney Colgan. Unable to attend were Jim Stohrer, Pike Colgan and Bill Rice. 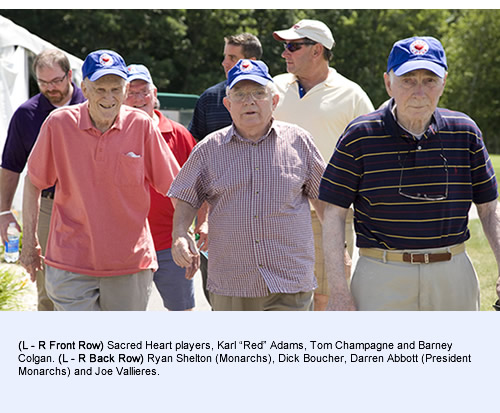 Congratulations to Casey Kesselring, Jeff Graham, Mike Beliveau, Trevor Smith who finished the very competitive event with five other teams at 12 under par. 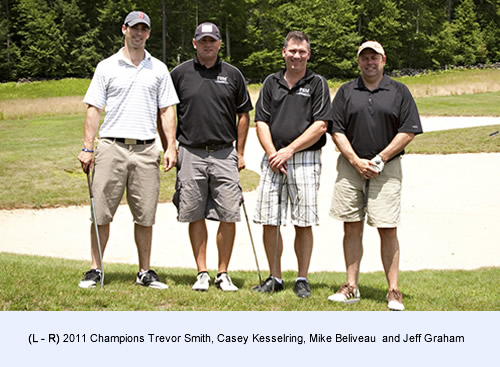 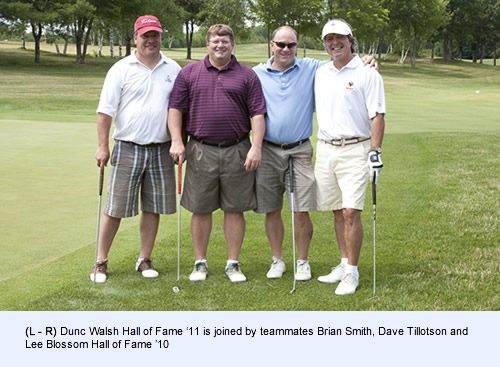 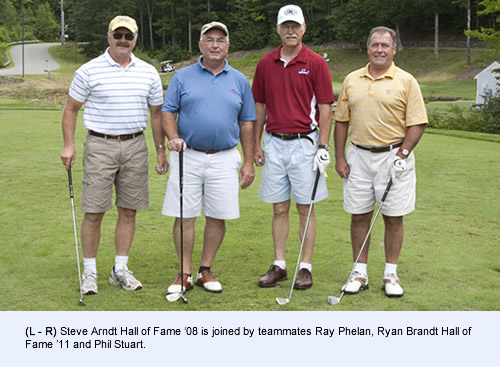 The New Hampshire Legends of Hockey gather nominations for election to the Hall of Fame, and raise money to preserve the donated archives, including historical literature, records, photos, film, clothing, equipment, trophies, etc. These collected artifacts are available for the viewing public in Berlin, Concord, Manchester and Nashua and on our on-line museum. We continue to search for artifacts and film from the old days. Anyone wishing to donate either is welcomed to do so.

No Replies to "2011 Golf Classic A Huge Success"