Thank you to everyone that supported our Eleventh Annual Golf Classic, presented by Bauer. Our event was held July 15 at the Stonebridge Country Club in Goffstown.

The event was kicked off with a message from John Normand, President of the New Hampshire Legends of Hockey (Legends). He gave special thanks and recognition to our Presenting Sponsor, Bauer (Global Headquarters) of Exeter, NH and our perennial Gold Sponsor, St. Paul’s School of Concord.

We are extremely grateful to all the players, sponsors, contributors (gifts in kind) and volunteers that help make this event one of the best in the state, each and every year”.

Once again we were blessed with marvelous weather and it was a great way to spend time with our hockey family and friends. We enjoyed another near-capacity field and with generous contributions this year’s Golf Classic was again one our most successful events. 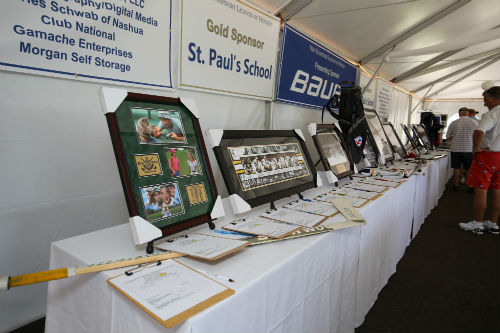 Arriving players and volunteers check out auction and raffle items

Listed below are our twelve Silver and nineteen Bronze Sponsors.

More than 100 businesses and individuals donated gifts in kind for the tournament. To view complete list, click on Contributors (Gifts in Kind) 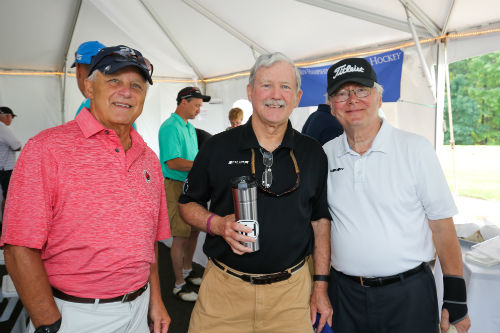 In addition, John acknowledged members from the Class of 2016 who will be honored this October 23 at Concord’s Grappone Center at the Fifteenth Annual Legends of Hockey Induction Ceremony. With us today is Head Coach Gary Bishop of Bishop Guertin. The Legends will also pay tribute to the St. Anslem men’s and women’s hockey programs. 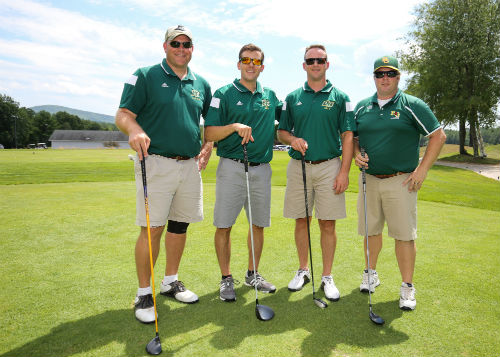 Pictured above is the group from Bishop Guertin. L to R Jason Tessini; Bob Langlois; Dan Connley and Steve Duprat. 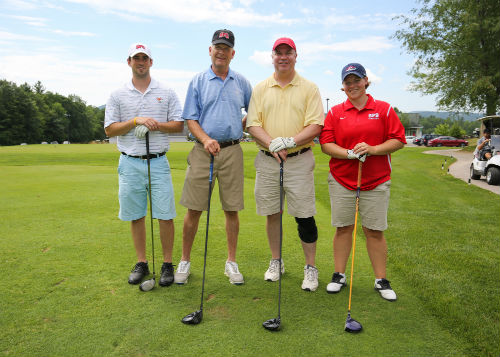 Congratulations to this year’s Champions. This year Lee Blossom, Mark Placy, Ryan Sahr and JM Sahr took home the title. They shot a 58 (-16) and bested the team of Kyle Macie, Chris McIntosh, Chris Stroshine and Collin Stroshine by 2. 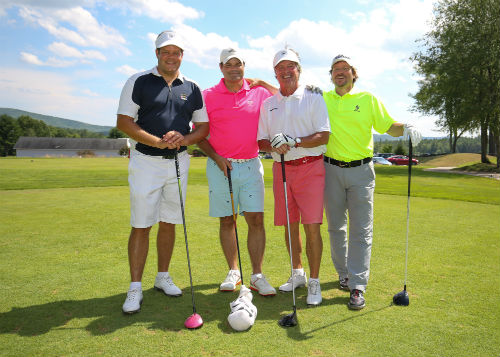 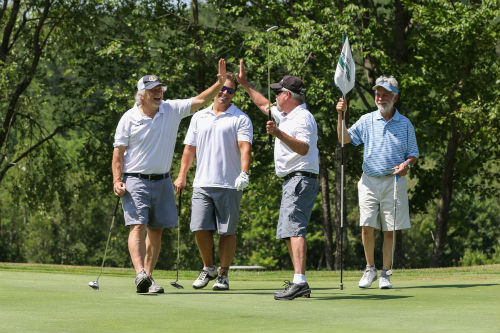 This year’s gift to all golfers and volunteers was this beautiful back-pack cooler bag. Coincidentally it keeps several of your favorite beverages ice cold for that long hike! Players also received a Bauer performance work-out shirt.

In addition, John recognized New Hampshire’s own Ben Lovejoy excellent all-round work in playing a key-role with the Penguins winning the Stanley Cup last June. As most of you probably know, Ben is the first player from New Hampshire to win the Stanley Cup. 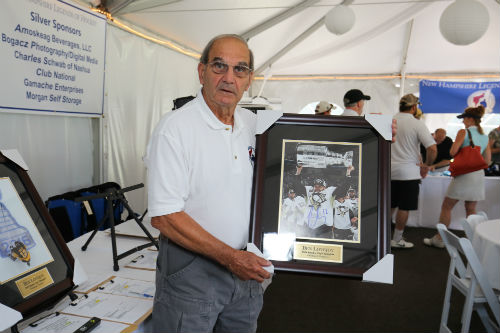 2016 Golf Date
Next year’s Golf Classic is scheduled for Friday July, 14, 2017, so please mark your calendar, grab your players plan on joining us!

2016 Golf Photos
More than 500 terrific photographs were taken by Matt Parker Photography and are available to view and or purchase. Click here to view. If you have any questions contact Matt at mparker3011@gmail.com

On-Line Auction Items
We are offering the following seven items for auction to our entire contact list. We will update current high bids along with the initials of the bidder approximately twice a week beginning with Friday September 2, 2016 and continuing to 5:00 Eastern time on Friday September 9th. If you are interested in bidding on any item(s) email hayes743@comcast.net.

NH Legends of Hockey Hall of Fame Induction Ceremony and Luncheon, honoring players, coaches, builders, and media representatives for their outstanding achievements and significant contributions to the sport of ice hockey in New Hampshire. We also collect and display hockey-related artifacts in our on-line Museum of New Hampshire Hockey and we support the growth of the sport through various activities, including our youth hockey equipment donation program and our sponsorship and support of the NH High School Senior All-Star hockey games as well as All-State recognition for both New Hampshire high school and prep school teams.

We continue to search for artifacts and film from the old days. Anyone wishing to loan or donate artifacts is welcomed to do so. Thank you in advance.

No Replies to "Annual Golf Classic A Big Hit"