Earlier this summer, the New Hampshire girls and boys hockey teams skated past Vermont. The two teams were selected by the NHIAA Coaches Association. The annual game which pits the best high school seniors was played at the Gutterson Fieldhouse, home of the UVM men’s and women’s hockey teams. Proceeds from the game benefit Make-A-Wish Foundation. The Legends uniforms were provided for both the boy’s and girl’s games.

The girl’s were coached by Al Oliveira of Dover-St. Thomas and Meghan Colitti also from Dover-St Thomas in addition to Kelli Braley from Souhegan High. In that game, Hanover’s Matti Hartman scored New Hampshire’s first and last goals. Hartman, New Hampshire’s MVP, broke a 2-2 tie when she scored the game-winner with 5:20 remaining on a power play. Hanover teammate Kelly Brigham scored New Hampshire’s second goal in the second period to give her team a 2-1 lead going into the third.

For the girls, Matti Hartman of Hanover was MVP, and Jess Cloutier won the Sportsmanship award. 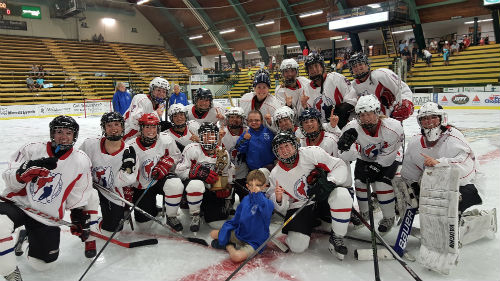 Team NH celebrates for a team photograph after their 3-2 victory of VT.

The boy’s were coached by Dover’s Steve Riker, Gary Smith of Lebanon and Matt Davis of Merrimack. In the boys’ game, Concord’s Bradley Murphy scored in the opening period and Bedford’s Alex Abad netted a goal in the third to propel the Granite Staters to victory. Bishop Guertin’s Justin Pearson assisted on Abad’s tally, which came with 12:46 remaining. 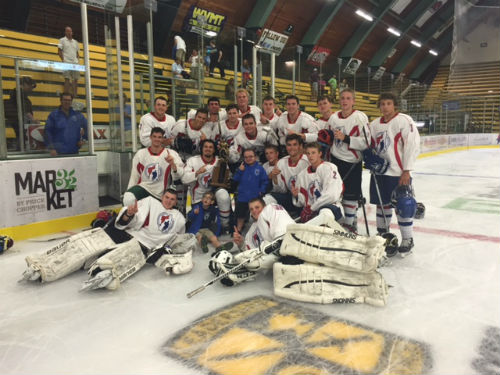 Team NH celebrates for a team photograph after their 2-1 victory of VT.

Ben Nelson, goalie from Concord, was MVP of the boy’s game, and goalie Nick Martinsen from Dover received the Sportsmanship award. 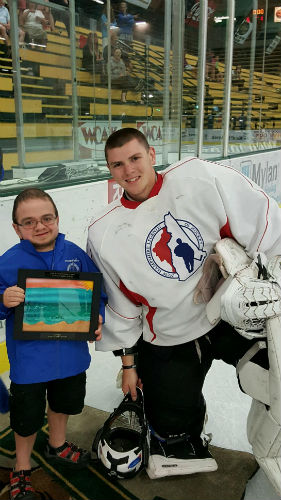 Members of both the Boy’s and Girl’s teams pose for a team photo in Vermont.

Members of the girl’s team prior to their 3-2 victory over Vermont.

Family and friends gathered in early July to celebrate the 100th birthday of Barney “The Rocket” LaRoche.

The family thanked everyone who helped make his 100th Birthday Celebration a special one, saying the generosity shown by those attending his party, the gifts, kind words and warm memories shared with No. 9 will never be forgotten.

Barney coached Notre Dame (Rams) High School for 13 seasons and during that time, their record was 161-79-17. During his tenure, the Rams never lost a single game to another New Hampshire high school. He won an unprecedented 13 NHIAA championships while outscoring their opponents 83-11. The Rams played in two New England championships, finishing as runner-up to Hamden, Conn., in 1954 before returning the favor to Hamden in 1957.

Barney also went on to coach the Maroons four seasons, beginning in 1964-65, ’65-66, ’66-67 and again in 1970-71. During those four years, Berlin’s record was 61-37-7. The Maroons won their second National AHA Championship in 1966-67 over Muskegon, Mich. Of note, the Maroons also won their third and final AHA championship the following season, besting Walpole Mass,, although LaRoche was not coaching.

Albert “Barney” LaRoche was inducted into the New Hampshire Legends of Hockey Hall of Fame on Feb. 17, 2002.

LaRoche also received an extra special birthday greeting from President Barack Obama and his wife Michelle. In their letter they wished LaRoche a happy 100th birthday and thanked him for contributions.

“Dear Barney: Happy 100th birthday! We are delighted to send our warmest wishes as you celebrate this special occasion, and to thank you for your service and sacrifice. Your story is an integral part of the fabric of our Nation, and over the course of a century you have witnessed the kind of tremendous progress that is possible when we work together in pursuit of a brighter tomorrow. We trust you take enormous pride in everything you have accomplished and in the ways your service has touched the lives of others. Again, happy birthday. We wish you the very best,” said the Obamas in their letter. 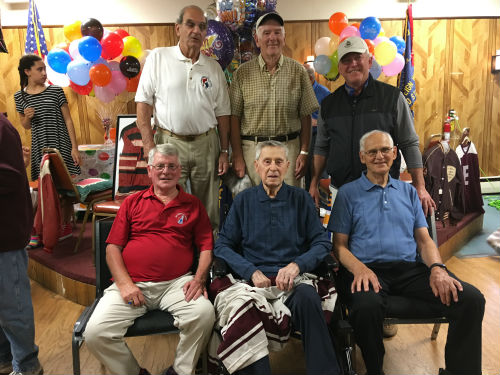 Raffle tickets are still available for a condominium in Whistler, BC. Whistler Blackcomb is a major ski resort located just over 70 miles from Vancouver, British Columbia, Canada. By many measures it is the largest ski resort in North America; it is 50% larger than its nearest competitor in terms of size, has the greatest uphill lift capacity, and until 2009, had the highest vertical skiable distance by a wide margin. In addition, in 2010 it was the site of the Winter Olympics.

Condominium is available from Friday March 3-March 10, 2017. Check-in time is approximately 2 pm as is check out. Confirmation can be made prior to trip.

Tickets are now available for the Fifteenth Annual Induction Ceremony. The Induction Luncheon and Ceremony will be held on Sunday October 23, 2016 at the Grappone Conference Center in Concord. Tickets are $40 per person. Contact Jim Hayes for ticket information hayes743@comcast.net

No Replies to "Around the Boards"