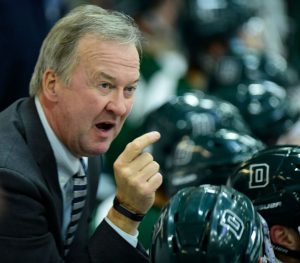 The New Hampshire Legends of Hockey is pleased to announce six inductees for its 2018 Hall of Fame class, who will be formally inducted during a ceremony on October 21, 2018.  The ceremony will be held at the Grappone Conference Center in Concord NH.  The ceremony is open to the public and tickets can be purchased by contacting Executive Director Jim Hayes at hayes743@comcast.net.

In addition, the hockey history of the Manchester Regional Youth Hockey Association (MRYHA) will be recognized. Hall of Fame Induction tickets will be available to the general public on September 1st.

Our event will begin with an 11:30 am social hour and for the first time, our ceremony will have Co-Master of Ceremony, Ken Cail and Chris Garrett and the Key Note Speaker will be Dick Umile.

Here is a closer look at the six inductees:

Brendan Creagh. In three years playing for Hanover High School in the late 1980s, Creagh was the team’s leading scorer all three seasons and left as the all-time leading scorer among defensemen. After a prep year at Phillips Andover he moved on to the University of Vermont, where he played four seasons and served as assistant captain as a senior year. A skilled, puck-moving defenseman, he played briefly in the AHL and enjoyed a four-year career in the ECHL.

Brian Foster. After starring for the Concord Capitals and then the Manchester Junior Monarchs, where he won an EJHL championship, Foster joined the UNH hockey team on a full scholarship. After two seasons backing up standout Kevin Regan, he assumed the starting role as a junior and went 19-11-4 with a 2.68 goals-against average and a .910 save percentage. He stopped 40 shots in one of the most memorable games in UNH history, a 6-5 overtime win over North Dakota in the NCAA tournament. As a senior he posted a 2.98 GAA and .908 save percentage, was named First Team Hockey East and Second Team All-America. After that went on to a 12-year pro career in the CHL, ECHL and AHL.

Bob Gaudet. Entering his 22nd as head coach at Dartmouth College, his alma mater, this fall, Gaudet is poised to become the all-time winningest coach in school history. His 305 wins at Dartmouth trail only Eddie Jeremiah (308). Twice he has been named ECAC Coach of the Year (1994-95 at Brown, 2005-06 at Dartmouth), and he led the team to the ECAC Hockey title in 2006 and the Ivy League title a year later. In three decades as a college head coach, he has worked with and developed several players who have gone on to play in the NHL, including Ben Lovejoy of Canaan, who was a Stanley Cup champion with the Penguins.

Don McKinnon. McKinnon moved to Durham in 1960 to assist his wife’s father in the millwork business. He’d refereed Ontario Hockey League games in his native Canada, and would go on the call five NHIAA championship games, including his first one between Hanover and Berlin in 1966. It was estimated he refereed more than 75 games in the Granite State Hockey League before that league terminated in 1967. He was also a fixture in the college game, calling more than 200 games in the ECAC and refereeing games in Divisions I, II and III, as well as the New England Hockey League.

Rich Ryerson. Ryerson skated for four seasons at St. Paul’s School, the last three under legendary coach Bill Matthews, where he earned the reputation as a player who could be used in all situations. He scored 38 points as a junior and served as co-captain as a senior. From there, he went on to Dartmouth, where he played 111 games from 1976-80, scoring 29 goals and adding 26 assists for 55 points. Twice in his career he helped the Big Green reach the NCAA final four.

Tony Urban. Growing up in the Berlin-Gorham area, Urban spent nearly four decades involved with high school hockey in the state. He spent 36 years as chairman of the NHIAA Hockey Committee, and served on the High School Hockey Federation for Hockey Rules Committee from 1977-88. He was inducted into the NHIAA Hall of Fame in 2008 and was instrumental in moving NHIAA championship games from the Whittemore Center at UNH to the SNHU Arena in Manchester.

No Replies to "Legends to Induct Six"