ALTON — Ken McKinnon, who is still playing hockey at the age of 78 and as recently as 2009 played in international competition in Japan, was in Ottawa, Canada, on the weekend of October 27-28, serving as a bench coach on a team he’s too young to play for.

On October 28, 2017, the first ever International Hockey game between two teams comprised of players from two countries all of whom were 80 years of age or over was held in Ottawa, Ontario, Canada. “The Game”  and was an official event of the Canada 150 Celebration. 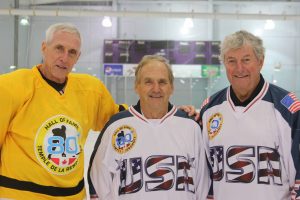 TEAM USA won the game 3-2 (shoot-out) and the Canada 150 Cup that is held by a group pf players in one of the attached pictures. Dean Harold, who is 88, was the oldest player to participate in this year’s tournament.. Mark Sertich 96, was an honorary member of the team.

Players on TEAM USA came from various parts of the US including  Alaska, California, Connecticut, Colorado, Florida, Illinois, Massachusetts, Minnesota, New York, and  Oregon.  And, one player came from Paris, France. 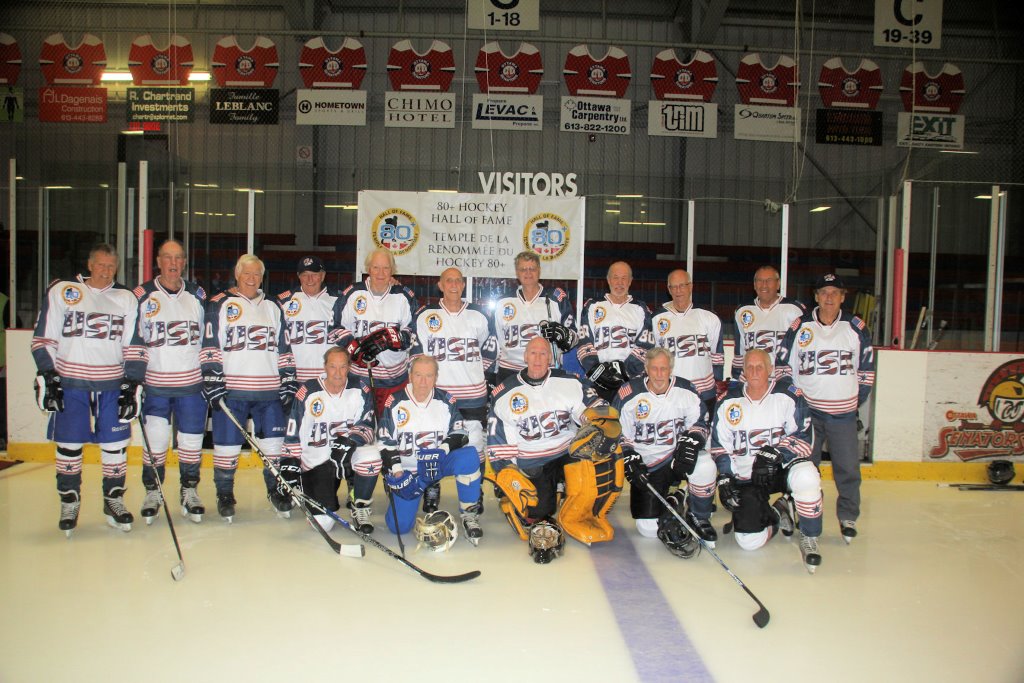 In addition, several new members were inducted into the Canadian 80+ HOCKEY HALL of  FAME.  Included as a new inductee was Norm Foster who many of you know as the Commissioner of Senior Hockey in Ellenton Florida. Norm is depicted below wearing his Hall of Fame jersey with Ken McKinnon and myself who were the coaches of TEAM USA.  A banquet for the players and new inductees into the Hall of Fame was held on Saturday evening with over 250  attendees.

A reception was held at the US Embassy in Ottawa for TEAM USA with the US Ambassador to Canada.

This game was the first in what is planned as an annual event. Next year (2018)  players who are US Citizens, play hockey regularly, and were born in 1938 or before will be eligible to play.

McKinnon, founder of the Lakes Region Legends adult men’s hockey league at the Merrill Fay Arena, will be in Canada, with a team of players over 80 years old who will be representing the United States in the Canada 150 Vintage Hockey game.

He hopes that in a few years he’ll be able to play in that game himself, provided that his knee responds well to surgery he expects will be taking place in the not too distant future.

“I’ve had my hips replaced but the knee is something else,” says McKinnon, who has been taking to the ice twice a week in recent weeks playing for the Patrick’s Pub team in the Legends league.

“I can’t get around like I used to, but it’s still fun to be out on the ice and playing hockey,” said McKinnon, who was still scoring goals when he played for Moe Marchand’s “Les Boys” team in Tokyo in 2009.

Not that scoring goals is anything new for McKinnon, who shares the University of New Hampshire record for scoring six goals in one game, something that took place 56 years ago when he was a junior at UNH.

He says that when he first saw the University of New Hampshire hockey rink in September of 1958 he was shocked.

“It was an outdoor rink and all you could see was sand with weeds growing up,” says McKinnon, a native of Toronto, Canada, who was the first Canadian hockey player to attend UNH.

He recalls that head coach Horace “Pepper” Martin, who had recruited him to play at UNH, realized that he would be upset after his first look at the ice rink and hastened to assure him that the Batchelder rink would be covered in a few years because the legislature was working on a plan to fund it.

“I was from Canada and I knew about Parliament but didn’t know anything about state legislatures, so I wasn’t sure what he was talking about,” said McKinnon, who added that, despite Martin’s assurance, the rink wouldn’t be covered until 1966, four years after he graduated.

McKinnon recalls showing up at UNH that year with a steamer trunk and being assigned to Alumni House, located in what was then known as the President’s Triangle, and meeting Dick Eustis and Tommy Cannon, who were on the same floor. Eustis was a star football player at UNH, where he was the pass-catching “lonesome end” on the football team, and held the state record for most points scored in his basketball career at Exeter High School, breaking a record formerly held by Reeve Tracy of Tilton-Northfield High School.

“I later on got a job working at the Tau Omega sorority and just stuck with hockey after that.” he says. He also served as president of the Sophomore Sphinx, the group that introduces freshman to college, and was recruited by Dean of Students Rob Gardiner to serve on the men’s judiciary board, which imposed punishments for rules infractions.

He also had a good time on the ice at the Batchelder rink, scoring six goals in a 10-4 win over Connecticut in February of 1961 to tie a UNH record. In his senior year he was captain of the team and was presented with the Jerry Culver Award for sportsmanship and leadership as well as the Roger LeClerc Award as most valuable player.

New Hampshire has been his home since college. He taught and coached at Concord High for two years before going into insurance business in 1964 at United Life and Accident Insurance Company in Concord, which was run by Concord area sports ;legend Tom Hardiman, who had starred in three sports in Concord and went on to Georgetown University where he starred in football and basketball and spent a year playing football for the Chicago Bears in 1951.

“He was my mentor and a great guy to work for. He encouraged me to get involved in officiating and told me it was ok to take time off during the week and that I could come in and catch up on my work on Saturdays,” he says.

McKinnon was the founder and president of the Granite State Hockey League, which would come to include the Laconia Lakers, who played at Leavitt Park and was led by players like Pop Whalen, Dick Ryerson and goalie John Richardson.

He played forward for the Concord Shamrocks, Concord Coachmen, and the Eastern Olympics. He later played in the Capital City Hockey League for 12 years and still competes in the Laconia Legends of Hockey League.

McKinnon is also highly regarded for his officiating. He became a member of the National Ice Hockey Officials Association in 1962 and he wore the stripes until he retired in 1991. He officiated nine NH High School State Championships, two NCAA Division II Championships, several other ECAC Tournaments and the Beanpot Tournament.

“When I retired from officiating and moved to Alton in 1991, I was the oldest guy playing in the Capitol City league. Merrill Fay’s son got ahold of me and told me they were looking to form a league for players over 35 and asked me to help. Before long we had 35 guys signed up and the first 22 were put on two teams. We went to four teams and then to six teams and have been playing Sunday and Wednesday nights for years,” said McKinnon, who four years ago turned over leadership of the Legends league to Ray Vigue.

The league has since expanded to 10 teams and plays games three nights a week.

McKinnon spends most of his winters in Florida, where he plays hockey at the Igloo Ice Arena in Ellington, and knows many of the players who will be taking part in the Ottawa tournament this weekend.

“This should be a lot of fun and it’s sure to bring back a lot of good memories for the players,” says McKinnon.

Ken McKinnon, left, lifts the stick of an opposing player during at game at Merrill Fay Arena on Sunday.