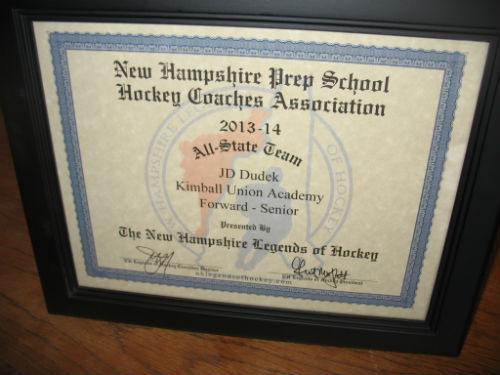 Certificate shown above is Senior Forward J.D. Dudek of Kimball Union Academy. Dudek was selected for his performance during the 2013-14 season. The Auburn New Hampshire native will be attending Boston College this fall.

Dana Barbin, long time head coach of Phillips Exeter said “we are extremely pleased to continue our partnership with the NH Legends of Hockey”. The Legends have provided framed certificates signed by their President Greg Moffett and Executive Director, Jim Hayes. The certificates should be delivered to the Athletic Directors this week.

There are many top prospects in Prep School Hockey, including top players Kevin Neiley and Henry Hart of Phillips Exeter Academy and David Storto of St. Paul’s School. However, it is very unusual for one school to have three top level performers. Meet J.D. Dukek, Tyler Bird and Brendan White of Kimball Academy. Click here to view article on the trio from the New England Hockey News.

In the Division I Large School Tournament, St. Paul’s School defeated Choate 2-0 in the Semi Final before bowing to Loomis Chaffee in the Finals of the Martin/Earl Tournament 3-2. SPS ended the season with a 20-9-1 record.

And in the Division I Small School Tournament, Kimball Union Academy won the Simmons/Piatelli Championship 3-2 over the Dexter School and ended the season with a 26-6-5 record.

In Division I, St. Paul’s School won their Quarter Final match handily before losing in the Semi Final to Westminster, 1-0. St. Paul’s ended their season with a 23-2-2 overall record.

In Division II, Proctor lost in the Quarter Finals to Gunnery 3-1, finishing their season with a
19-9-1 overall record.

Around the Boards..Bruins, Monarchs and More