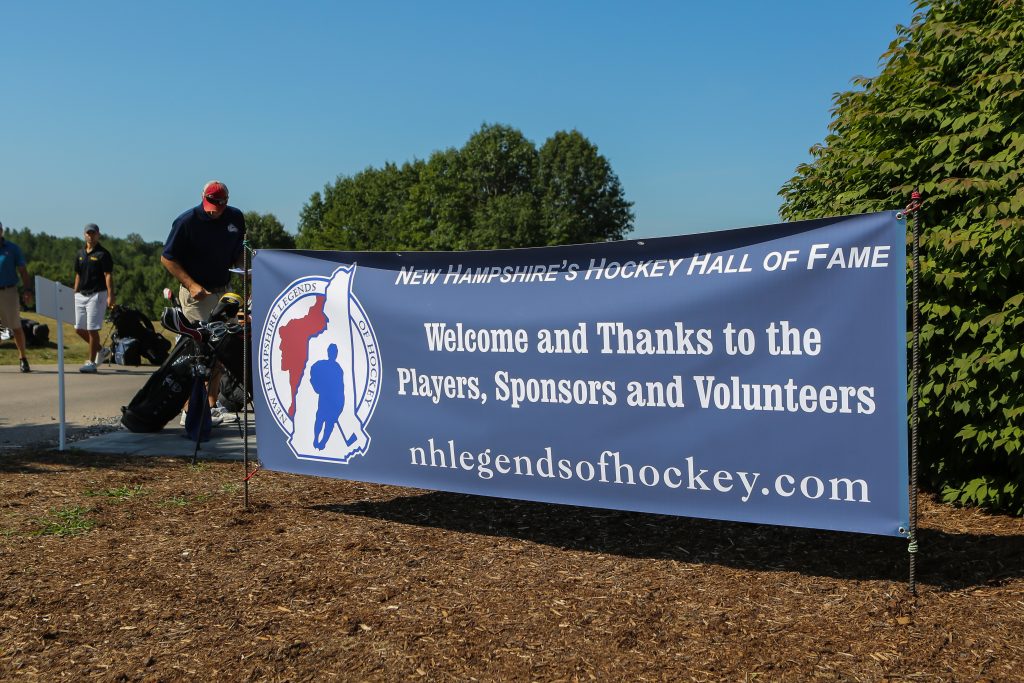 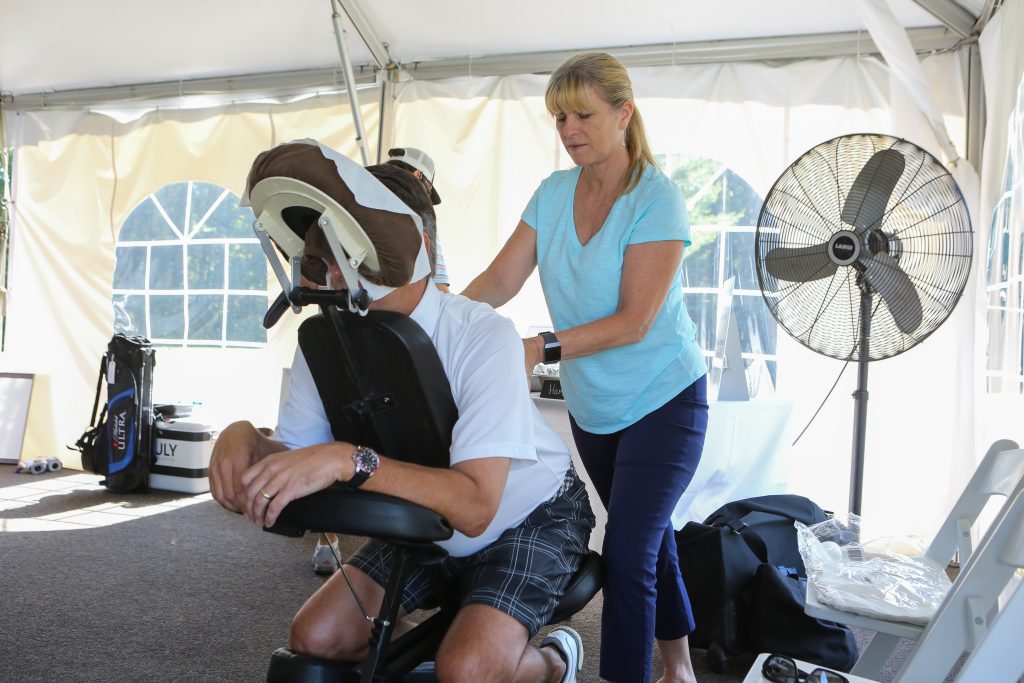 Andrea of Arias Spa works on a golfer. 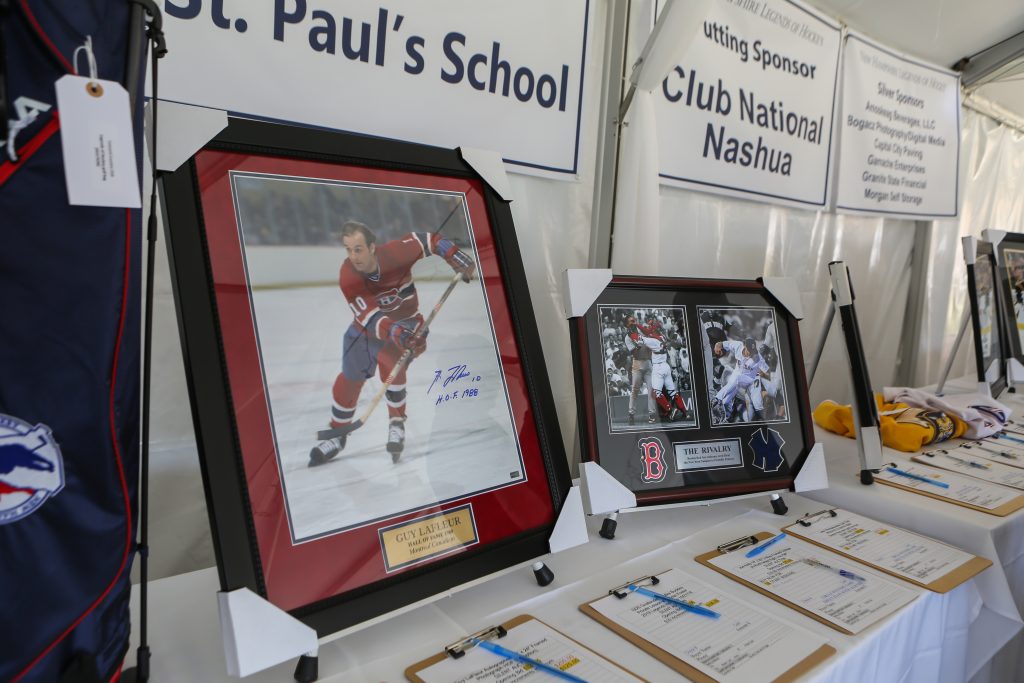 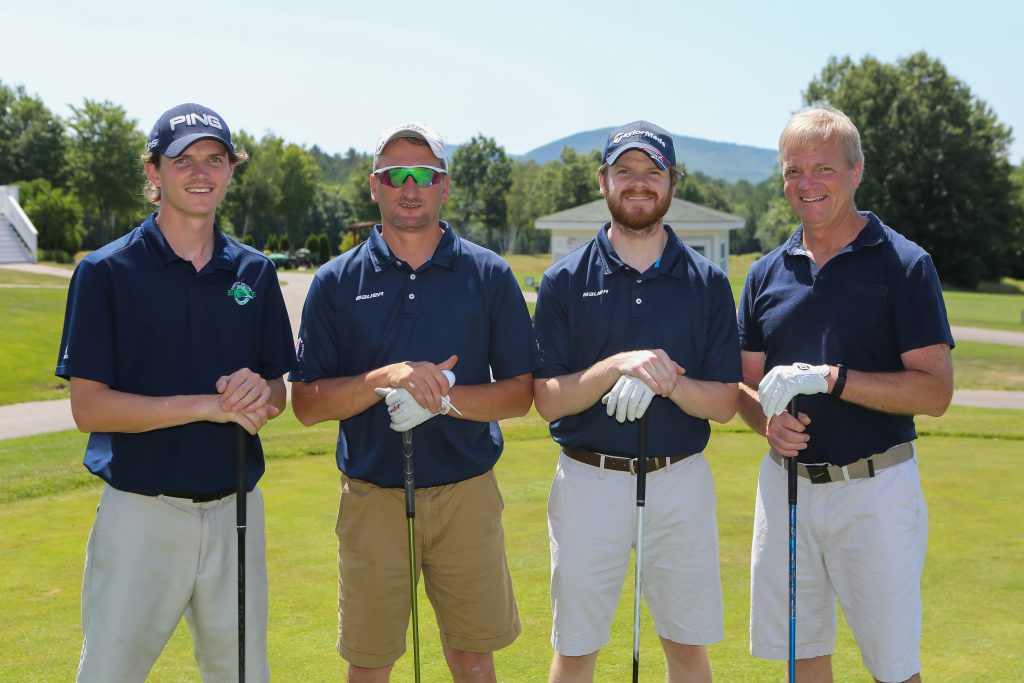 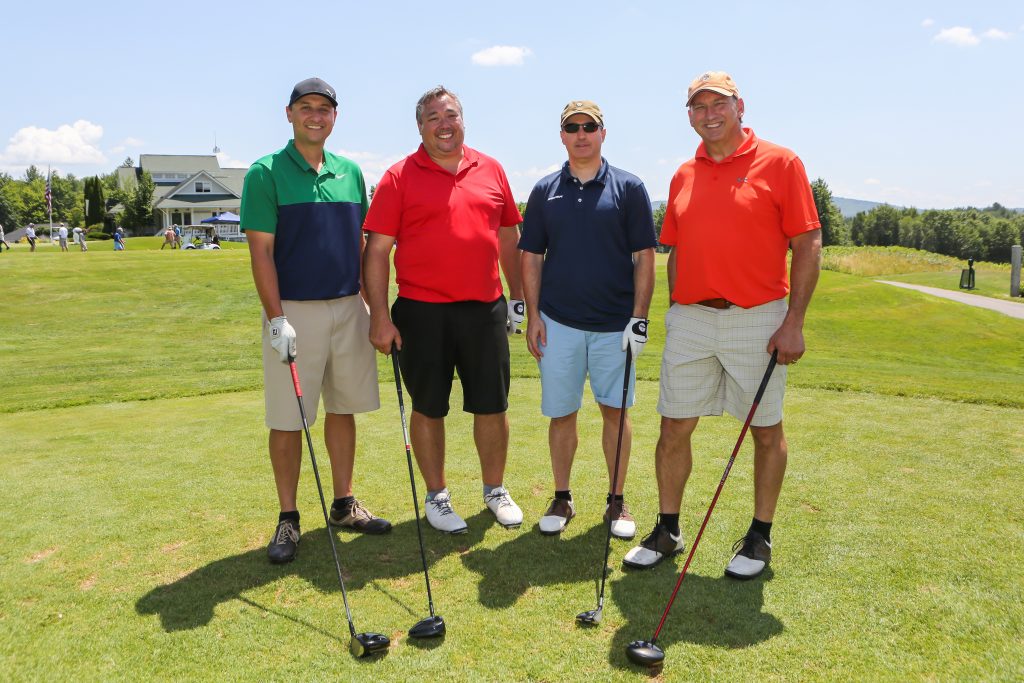 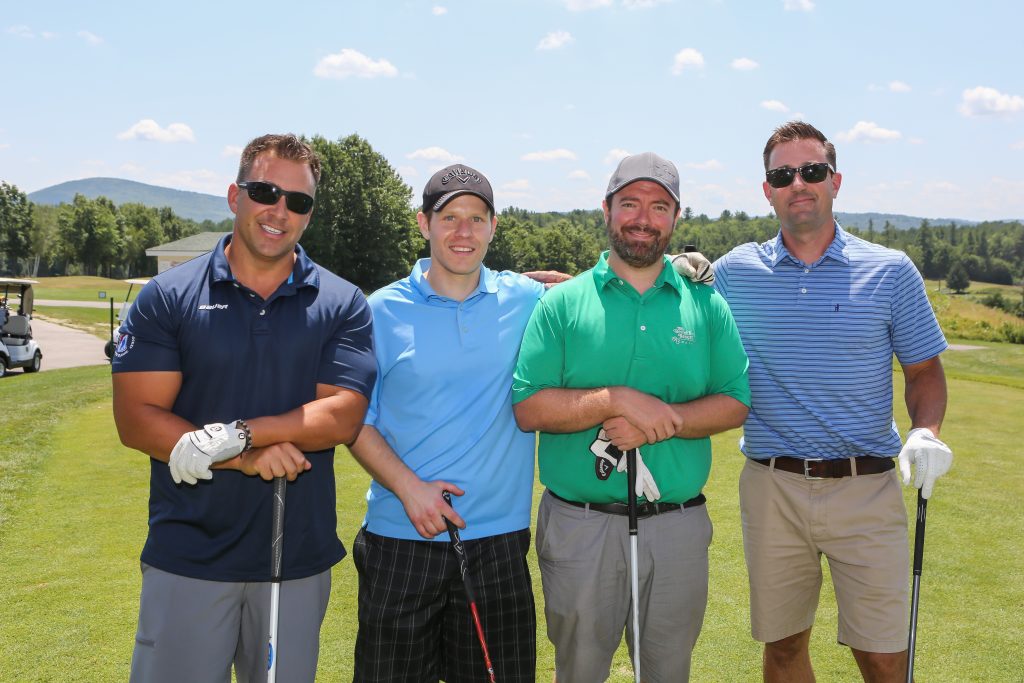 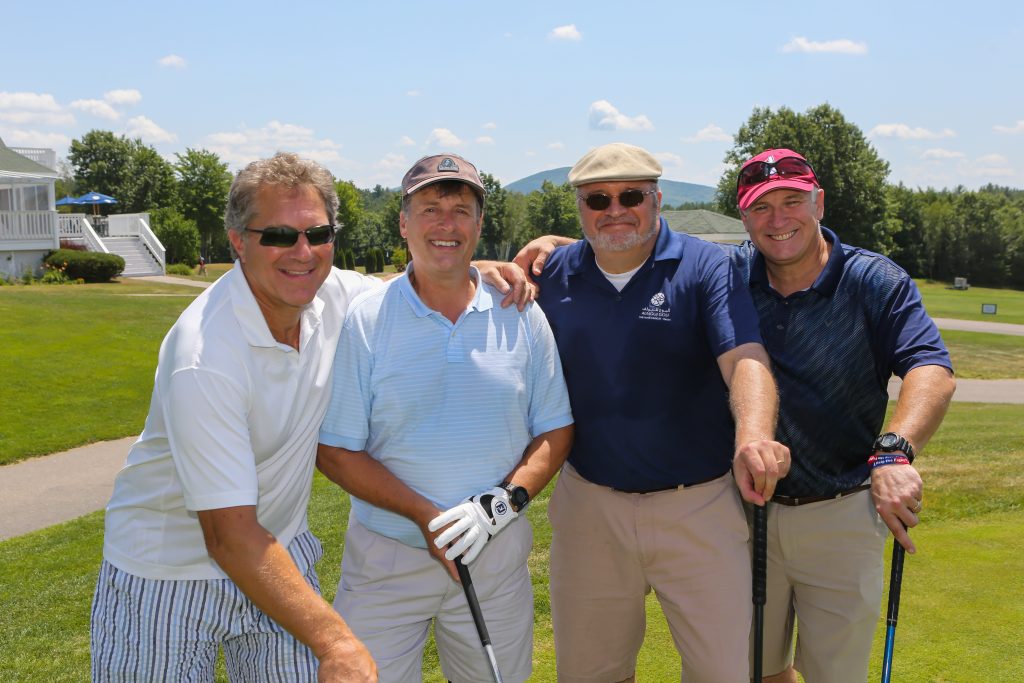 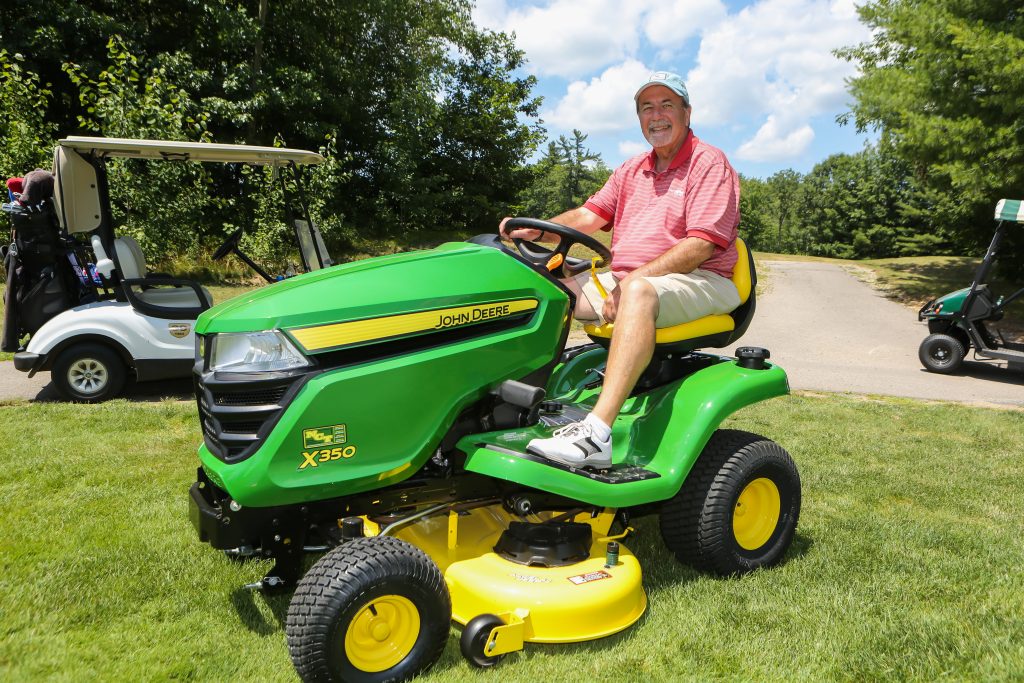 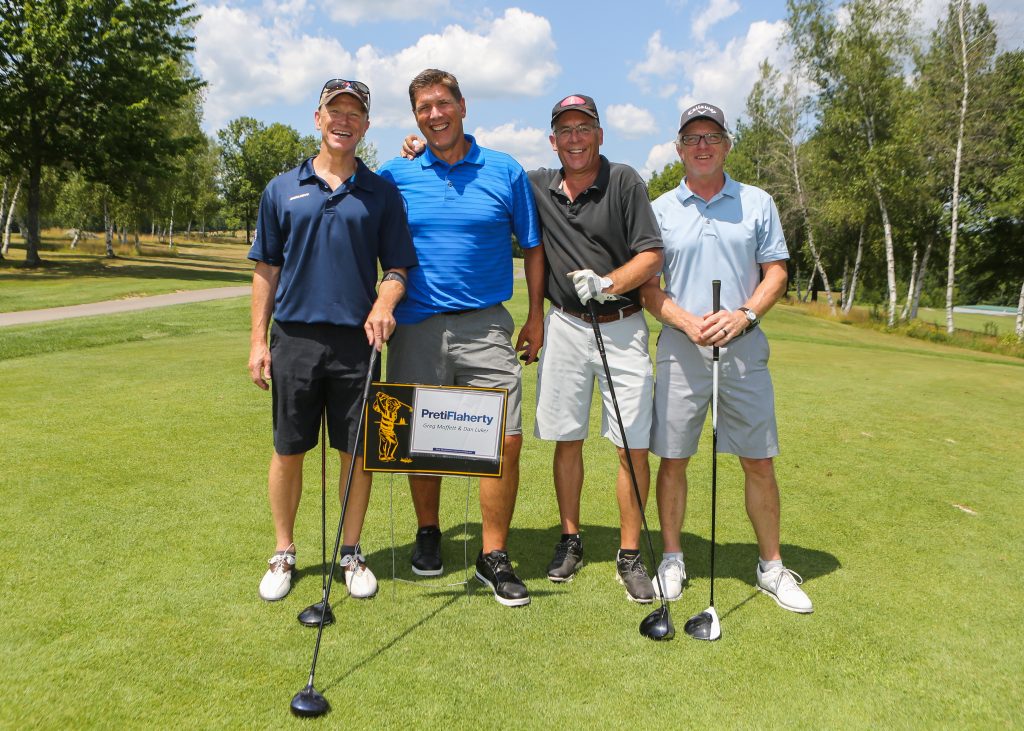 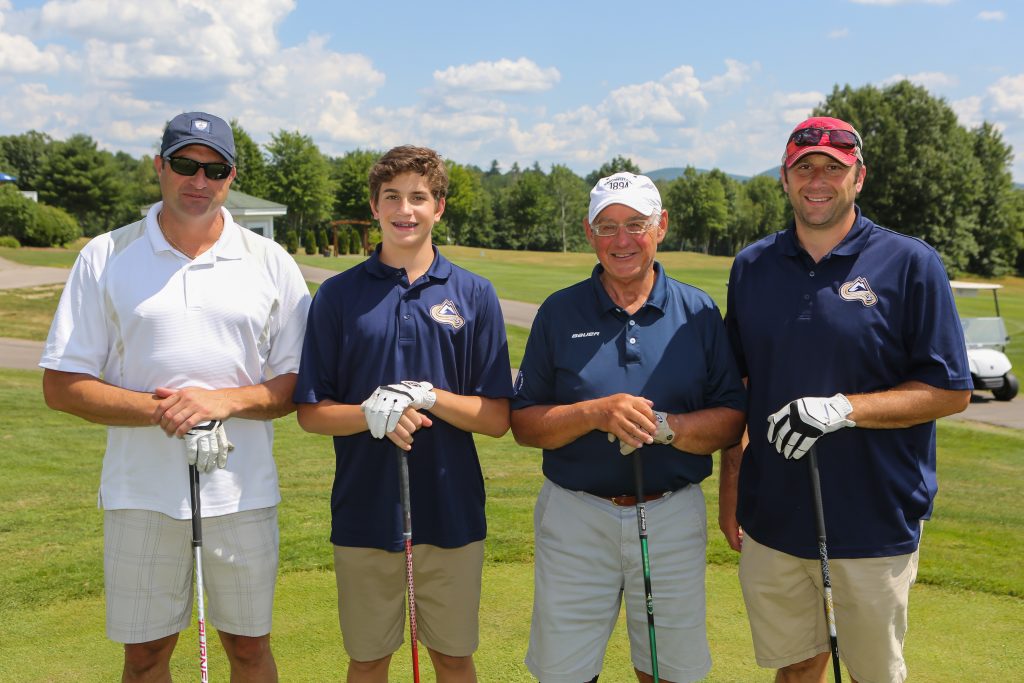 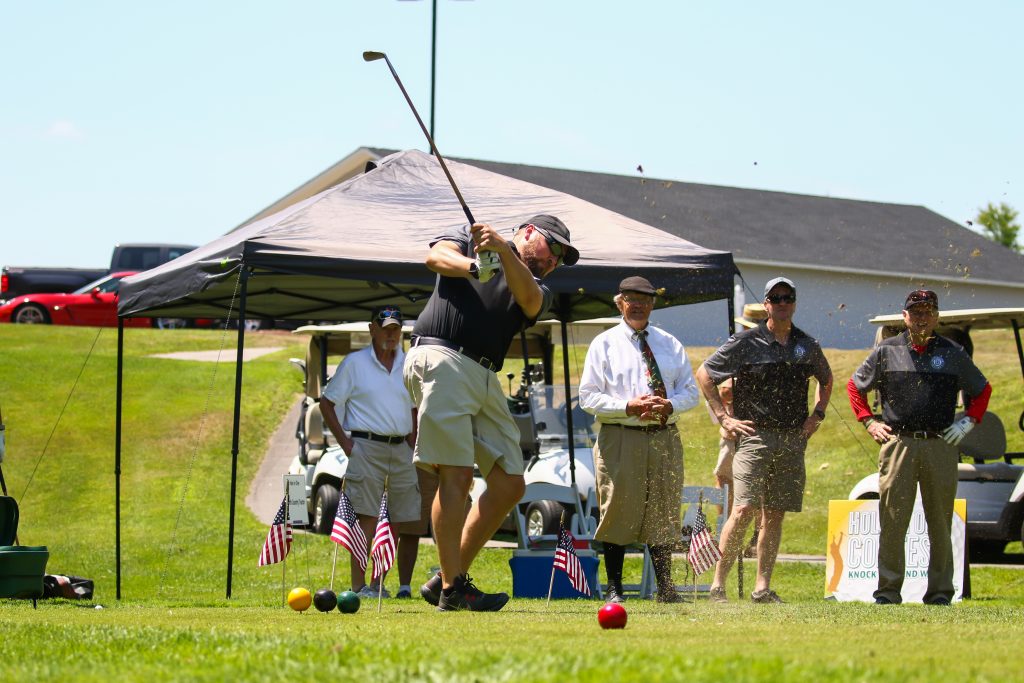 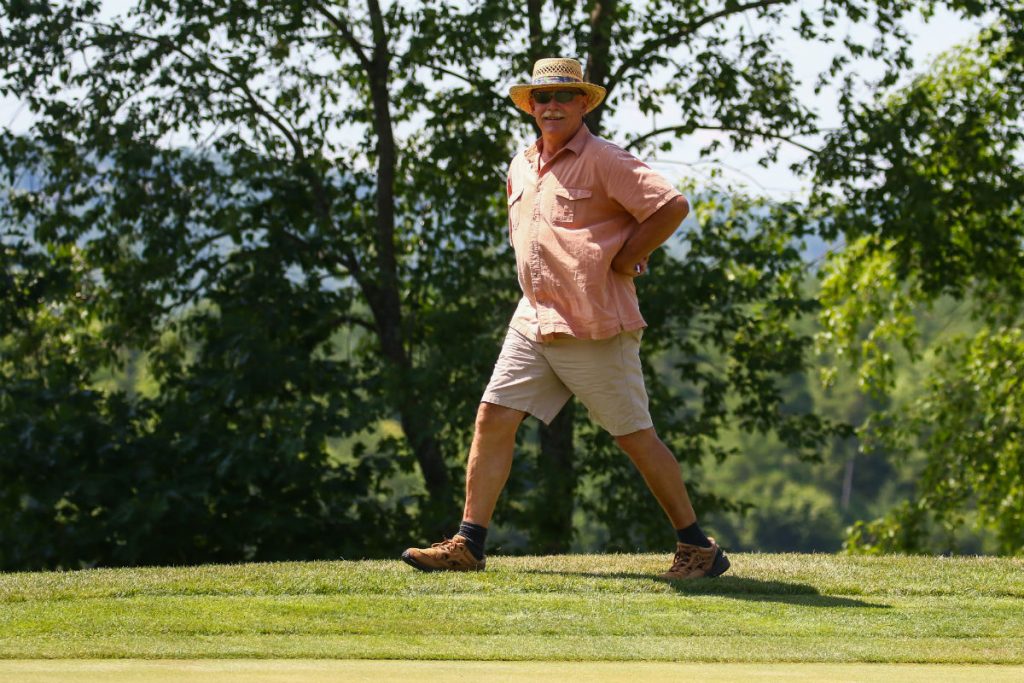 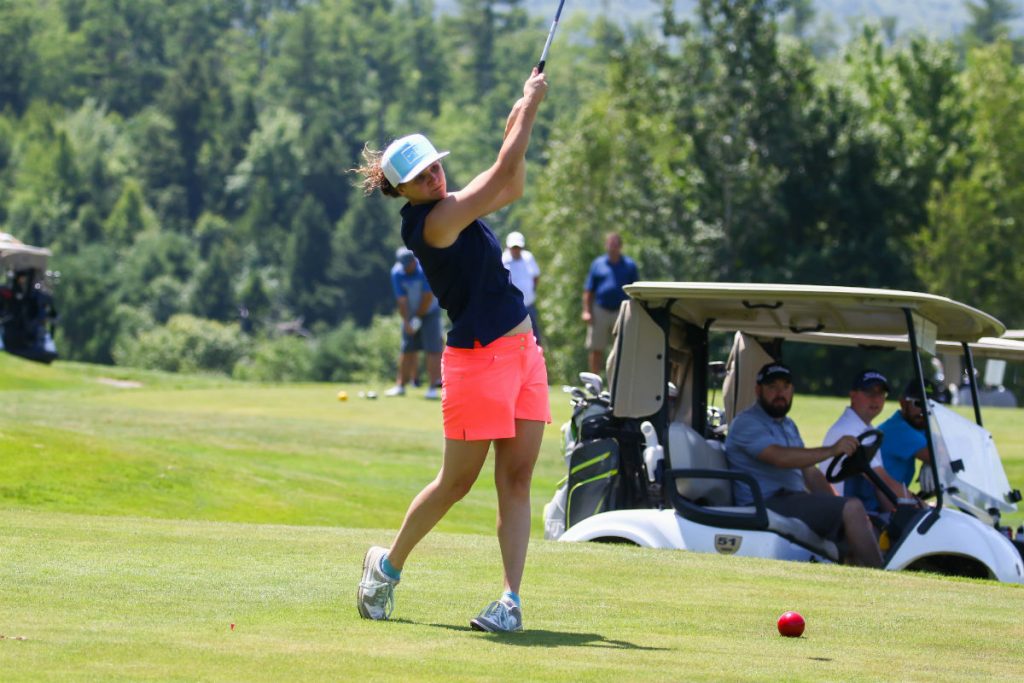 Perhaps the prettiest and best swing was by Lauren Albee of Rochester Youth Hockey Association. 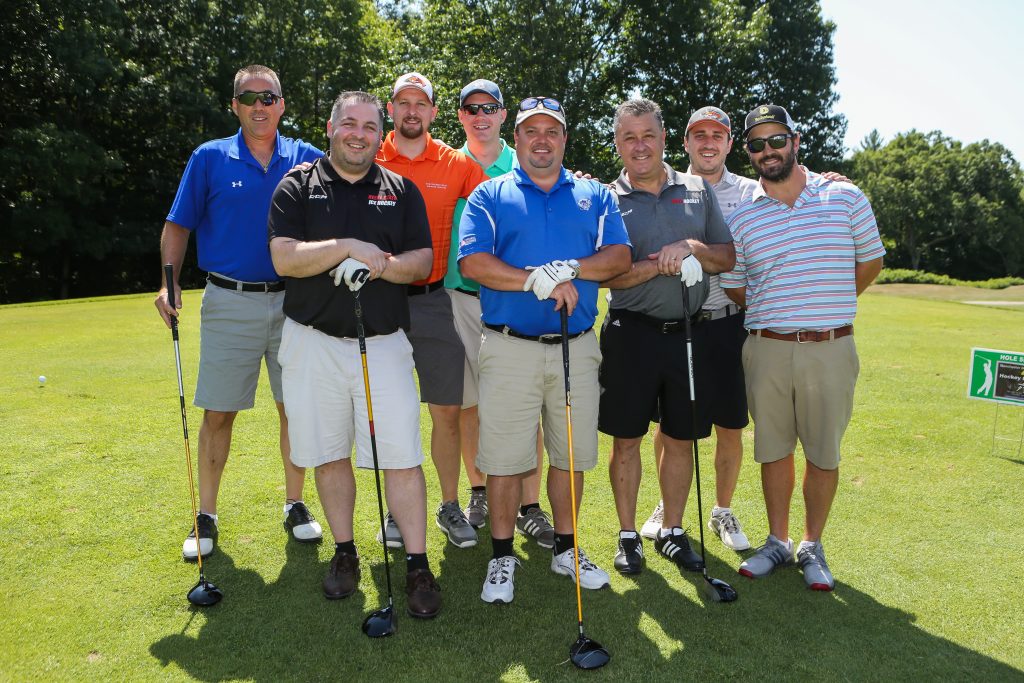 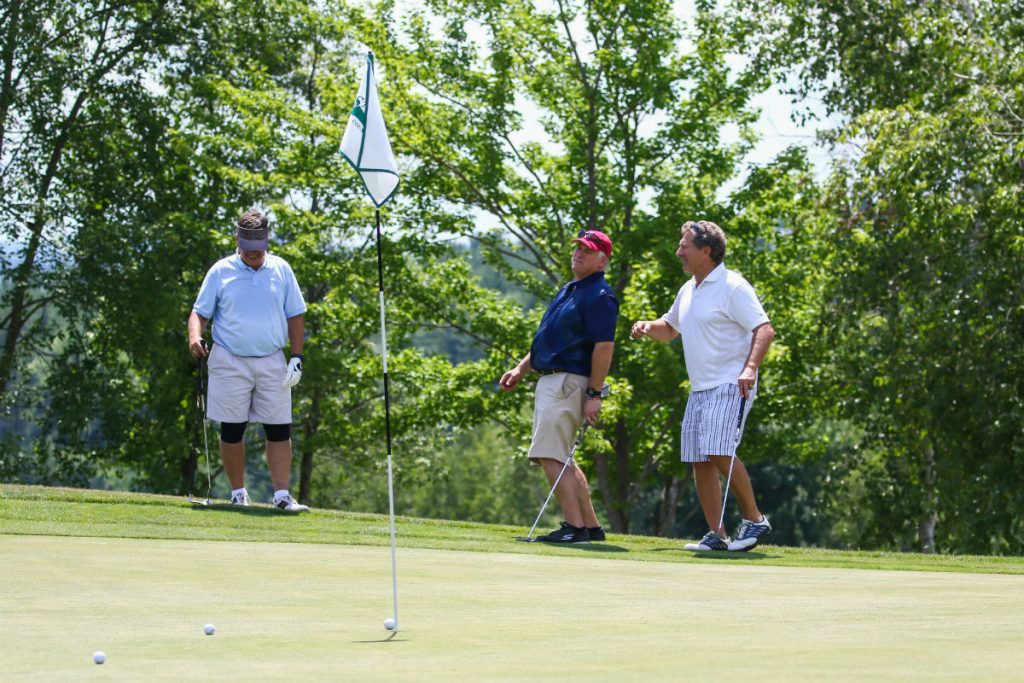 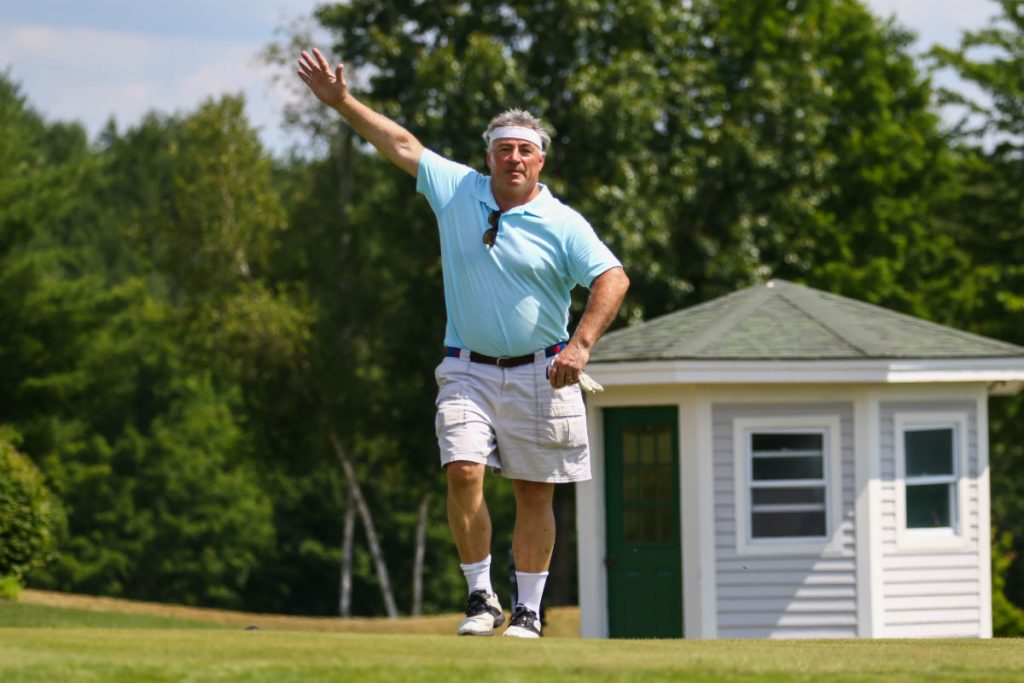 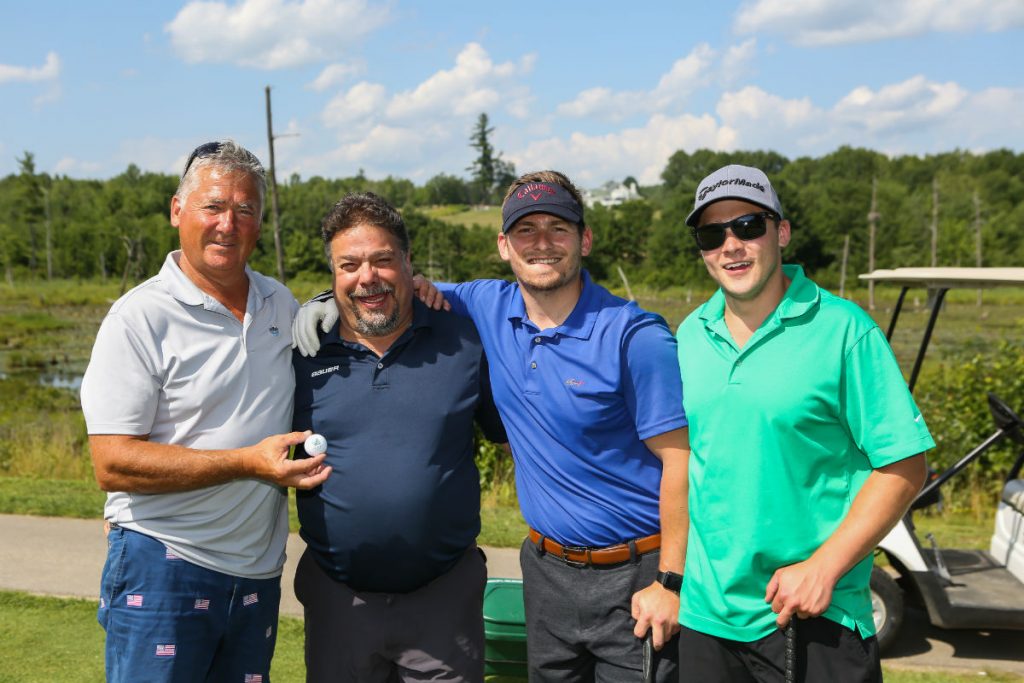 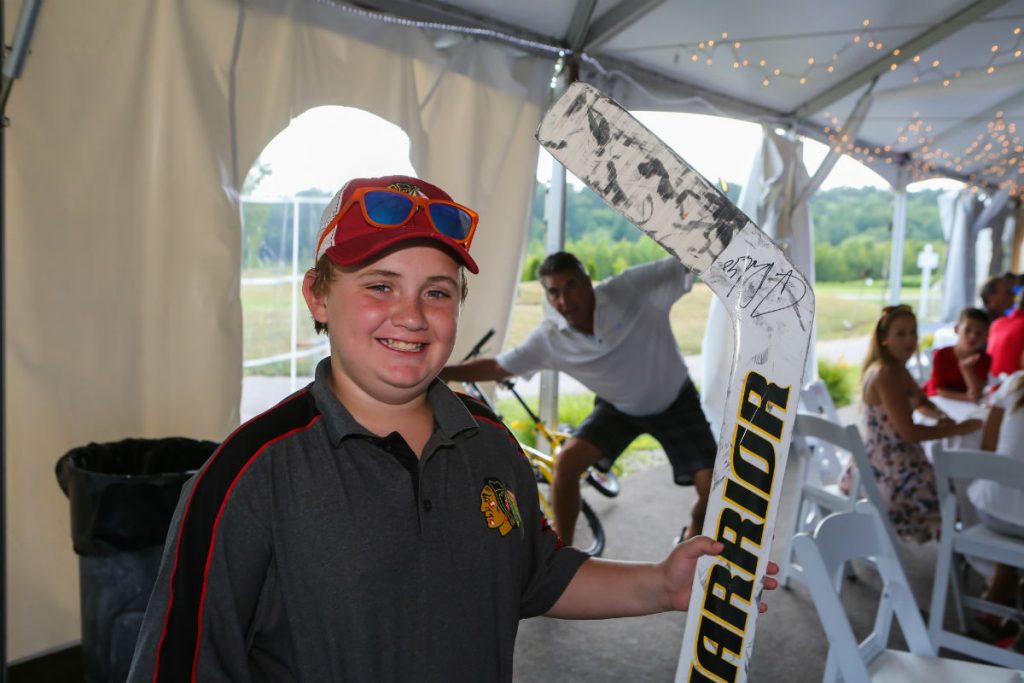 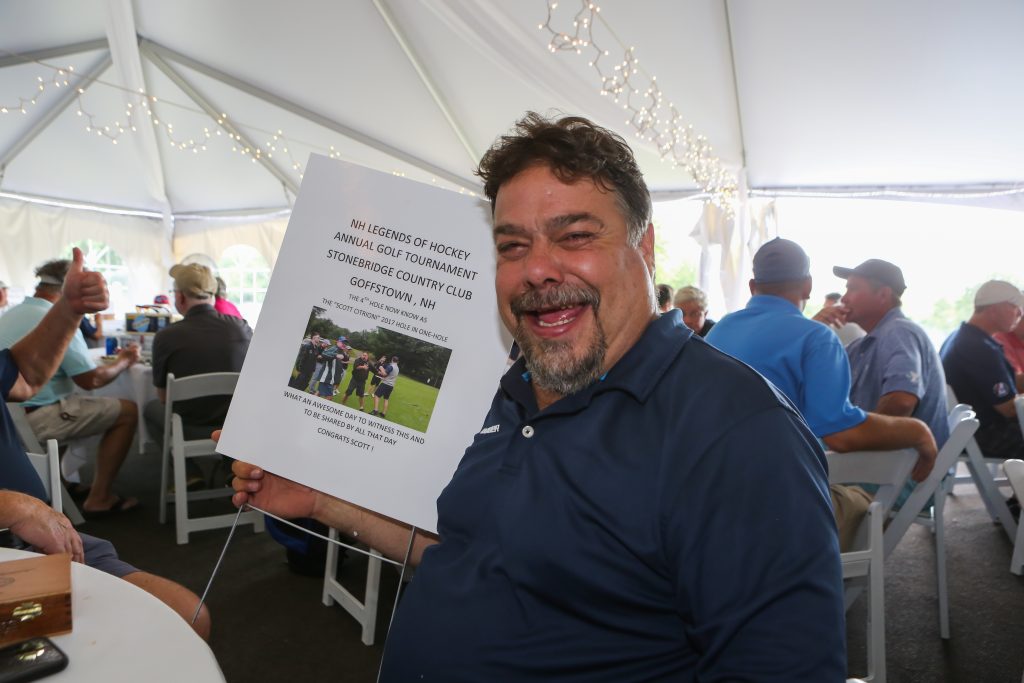 Scott Citroni is still celebrating after his 2017 Hole-in-One on the 4th hole. 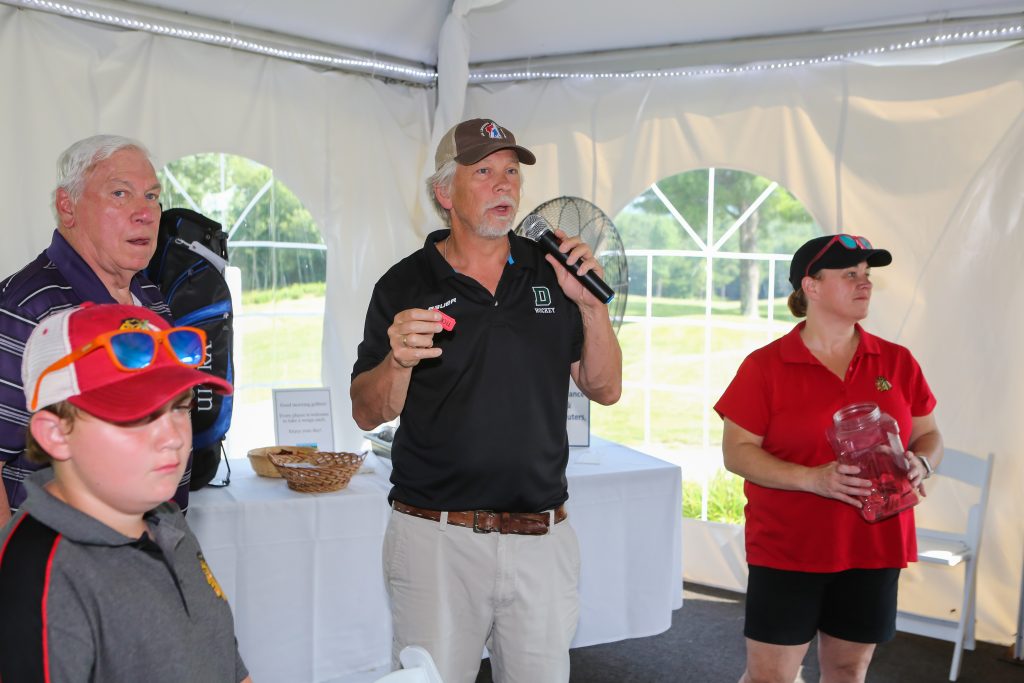 Thank you to everyone that supported our Thirteenth Annual Golf Classic. Our event was held July 13 at the Stonebridge Country Club in Goffstown.  We can almost always guarantee beautiful weather, and this year was no exception.

Our event was kicked off with a message from John Normand, President of the New Hampshire Legends of Hockey (Legends). He gave special thanks and recognition to our perennial Gold Sponsor, St. Paul’s School of Concord as well as our Putting Sponsor, Club National of Nashua.

“We are extremely grateful to all the players (full-field of 132), sponsors, contributors (Gifts in kind) and volunteers that help make this event one of the best in the state, each and every year”.

More than 750 photographs taken by Matt Parker Photography can be viewed and or purchased for a nominal fee.

Listed below are our twelve Silver and sixteen Bronze Sponsors.

Gift In Kind: More than 100 businesses and individuals donated gifts in kind for the tournament. To view complete list, click on (Gifts in Kind)

In addition, John acknowledged one individual from the Class of 2018 who will be inducted October 21 at Concord’s Grappone Center at the Seventeenth Annual Legends of Hockey Induction Ceremony. With us today is Bob Gaudet Dartmouth College Men’s Hockey Coach who will be entering his 22nd season at Dartmouth.

The Legends will also pay tribute to the Manchester Regional Youth Hockey Association (MRYHA) and their history.

This year, we introduced the memory of Boston hickory golf-club and golf ball maker G.S. Sprague (1870 – 1928).   Robert Sprague, is the great-grandson of Boston clubmaker G.S. Sprague, and portrays his great-grandfather joined us on Hole 6.  Each player had a chance to hit one of his 1912 mesh golf balls and see how well you like Mr. Sprague’s best hand-forged mashie irons “using only the best native New Hampshire hickory shafts”.

In addition, on Hole 4, board member Dave Beauchamp and Jen Lentz and her son Connor from the Rochester Youth Hockey Association helped raise money which will be used for necessary equipment for the upcoming season.  In addition, Rochester entered a team in the tournament.

We also added two new Hole In One prizes this year from Hole In One International.  On Hole 6, there was $5000.00 Cash and on Hole 16, a Hawaiian Vacation worth $3,000.00.  Those two, coupled with North Country Tractor of Concords’ riding John Deere lawn mower for the First Hole In One on Hole 4 “The Scott Citroni Hole” rounded out the big prizes. 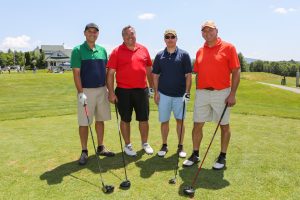 2019 Golf Classic
Mark your calendar now, for next year’s Golf Classic is scheduled for Friday July 12, 2019.  So grab your  teammates now, and plan on joining us!

2018 Golf Photos
More than 700 terrific photographs were taken by Matt Parker Photography and are available to view and or purchase.  If you have any questions contact Matt at mparker3011@gmail.com

2018 Induction Ceremony
NH Legends of Hockey Hall of Fame Induction Ceremony and Luncheon, honoring players, coaches, builders, and media representatives for their outstanding achievements and significant contributions to the sport of ice hockey in New Hampshire. If you’d like to join us and or sponsor this premier event, please contact Jim Hayes at hayes743@comcast.net