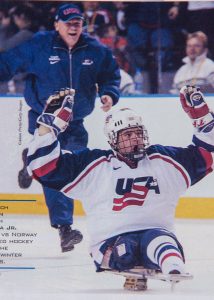 The team inspired the city and the game and was played in front of a capacity crowd of 8,600 people at the E-Center.

The time has come to tell the dramatic story through a scripted film. This story has similarities to the Disney produced movie “Miracle” that told the story of a bunch of college kids who beat the unbeatable Russians in the 1980 Olympics and went on to win Gold!

We believe our story, this movie “Tough Sledding” will tug at your heart and bring you out of your seat like no movie since “Miracle”. There is a depth at the heart of “Tough Sledding” and the characters whose stories will drive the movie. It is a story of seeking fulfillment as individuals against a backdrop of obstacles facing the team goal.

Click on our Indiegogo site https://www.indiegogo.com/projects/tough-sledding-sports-usa#/ and watch the ripomatic “Tough Sledding” – it will be the first movie about a Paralympic sports team. A ripomatic is a short compilation of scenes from other sports movies that will give you a good idea of what our story is all about.

For just $10, we will include your name in the credits and your donation is tax deductible!  Donate: https://igg.me/at/toughsledding 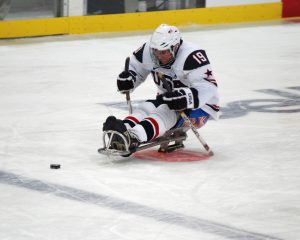 If you are interested, please paste this email and link to our IndieGoGo site to your friends or groups that may like to help. If you know of individuals, companies or organizations you would like us to contact, we would appreciate that.

Launch party is scheduled later this winter. If you’d like to join our launch party in Boston later in March please RSVP to toughsledding18@gmail.com as soon as possible. Those who RSVP will be entered into a drawing for amazing tickets to the Bruins game that night across the street.

Legends Hall of Famer Taylor Chace of New Hampshire played on the Bronze 2006 (Torino Italy), and Gold Medal teams in 2010 (Vancouver) and 2014 in (Sochi Russia).

No Replies to "Tough Sledding - The story of the 2002 U.S. Paralympic Sled Hockey Team"