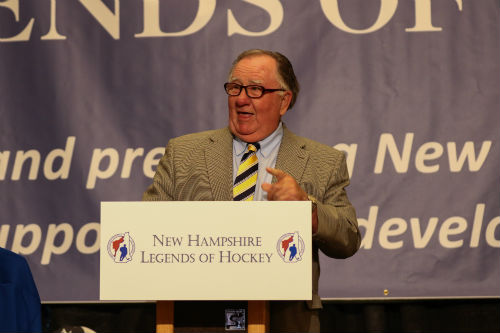 Master of Ceremonies, Bob Norton, and the New Hampshire Legends of Hockey Board of Directors inducted five new members into the New Hampshire Hockey Hall of Fame class of 2016, in front of a crowd of 250 family members, friends, dignitaries and guests.

The Legends also paid tribute to Men’s and Women’s team from Saint Anselm College. The Hall of Fame Induction Ceremony & Luncheon was held on October 23, 2016 at the Grappone Conference Center in Concord and marked the NH Legends’ fifteenth year hosting the event.

Jeff Giuliano, Assistant Coach of the Manchester Monarchs, was one of five individuals inducted into the hall. “It was an honor to be inducted into the Hall of Fame,” Giuliano said. “The New Hampshire Legends of Hockey is a great organization that should be commended for its efforts in preserving New Hampshire ice hockey history and really promoting the sport.” 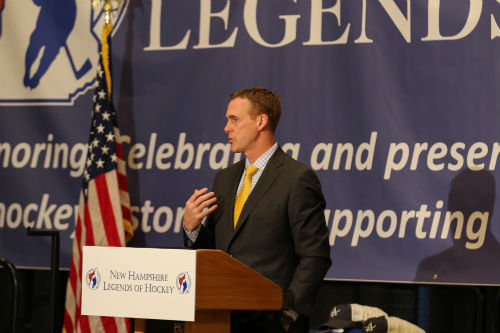 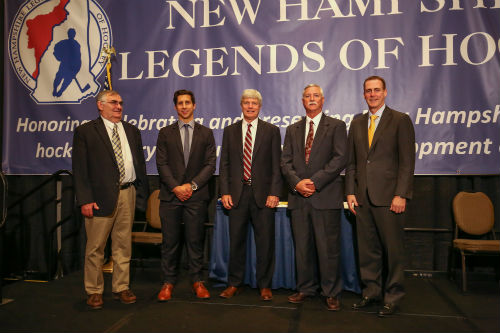 Normand also thanked the 30 other sponsors who helped make the Hall of Fame ceremony possible through their Gold, Silver, and Bronze-level sponsorships. Those sponsors are:

Senator Lou D’Allesandro reads a letter from the Governor 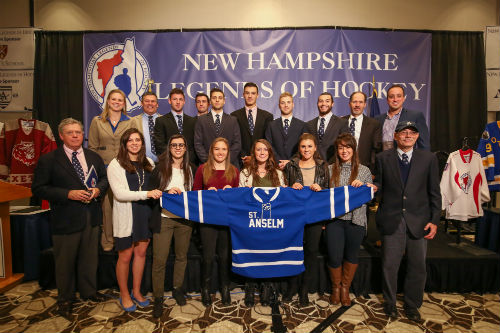 Current and former members of the Saint Anselm College hockey teams Front Row L to R: Dick Burke; Meghan Spurling; Alex Starzyk; Alison Butler; Alison Quinn; Martha Findley; Jackie Guy and Gary Smith. Back Row L to R: Kerstin Matthews; Larry Roche; Nick Leonard; Lonnie Taylor; Vin D’Amato; Peter Sikalis; Brendon Kerrigan; CJ Blaszka; Ed Seney and Ryan NolinThe jerseys shown above were auctioned at the ceremony. If you are interested in purchasing one, please email hayes743@comcast.net Currently, nine jerseys are available, and can be adorned with a number of your choice and nameplate. Each jersey can be purchased for $100.00.

Concord Mayor, Jim Bouley, extended a welcome on behalf of the Capital City and briefly traced the history of ice hockey in the City of Concord, from the first hockey game played in 1883 at St. Paul’s School to the more recent Black Ice Pond Hockey Championship at White Park. Bouley remarked that the Black Ice event will be held at Concord’s White Park again this year in late January. 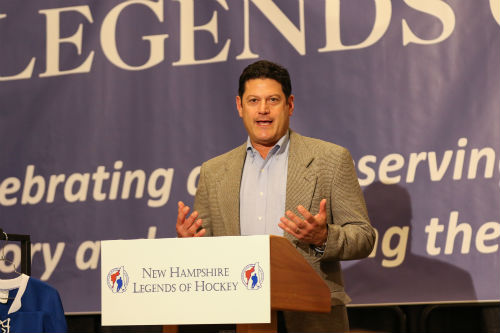 The Key Note Speaker was Jeff Eisenberg. Jeff was the Monarchs first President and told his story of the road he traveled to get from Tennessee to Manchester (a place he still calls home – since 2001) and how the Legends of Hockey came to be. 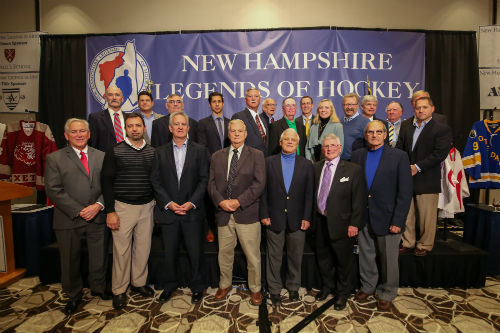 The New England College men’s and Women’s programs will be honored at the 16th Hall of Fame Induction Ceremony. 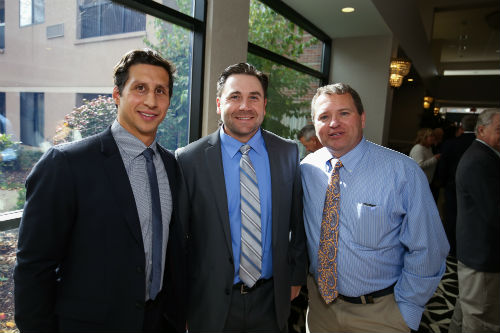 John recognized Past-President Gregg Moffett for his Outstanding Leadership and Service as President from 2013-2015. 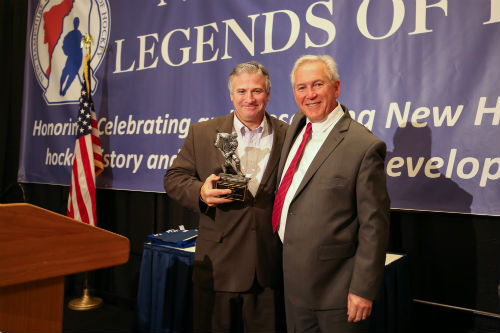 Next year’s Induction Ceremony is tentatively slated for next October 22nd, so please mark your calendar for our Sixteenth Annual Hall of Fame Induction Ceremony at the Grappone Conference Center in Concord. If you’d like to become a sponsor, please email hayes743@comcast.net or call Jim Hayes at 603-731-4168.

2017 Nominations can be submitted on-line beginning January 1 and continuing through the end of February.

No Replies to "Five New Members Join the Hall"