Thank you to everyone that supported our Twelfth Annual Golf Classic, presented by Bauer. Our event was held July 14 at the Stonebridge Country Club in Goffstown.

Our event was kicked off with a message from John Normand, President of the New Hampshire Legends of Hockey (Legends). He gave special thanks and recognition to our Presenting Sponsor, Bauer (Global Headquarters) of Exeter, NH, our Title Sponsor, The Rinks at Exeter, our perennial Gold Sponsor, St. Paul’s School of Concord as well as Co-Title Putting Sponsors, Club National and Charles Schwab, both of Nashua.

“We are extremely grateful to all the players, sponsors, contributors (gifts in kind) and volunteers that help make this event one of the best in the state, each and every year”.

For perhaps the first time in twelve years, it was cooler, but that meant comfortable weather to spend time with our hockey family and friends. Again, we enjoyed another near-capacity field and with generous contributions this year’s Golf Classic was again one our most successful events. 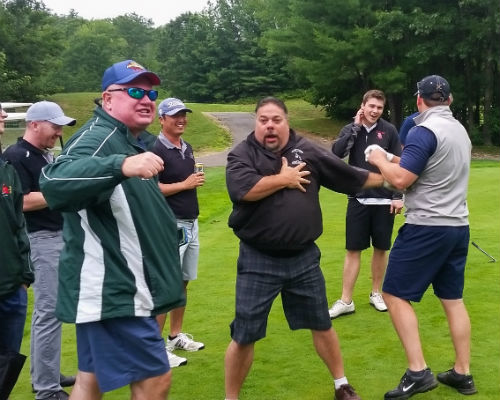 Can you believe it? Shown above in center, Scott Citroni, reacts just after knocking in his ball for a Hole N One on the 4th Hole. Director Dave Beauchamp (green jacket) and others react. This was the first ever Hole N One in twelve years, and from this day forth will be called “The Scott Citroni 4th Hole.”

More than 500 photos from Matt Parker Photography can be viewed and or purchased for a nominal fee. 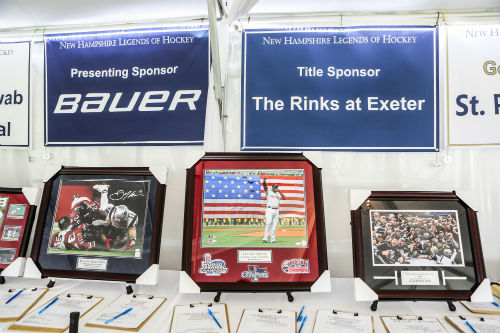 Listed below are our eleven Silver and nineteen Bronze Sponsors.

Nearly 100 businesses and individuals donated gifts in kind for the tournament. To view complete list, click on Contributors (Gifts in Kind)

In addition, John acknowledged two names from the Class of 2017 who will be inducted October 22 at Concord’s Grappone Center at the Sixteenth Annual Legends of Hockey Induction Ceremony. With us today is Roger Letourneau who played for Berlin High School, the Berlin Maroons, the Concord Eastern Olympics and the Concord Budmen. In addition, Mark Thurston entered a foursome, his grandfather George “Fuzzy” Thurston was from Exeter and was a standout player for the Amesbury Maples senior team for decades, playing his last game in 1969 at the age of 66 for the Amesbury Alumni. He was invited to be part of a “Boston Olympic Team” that traveled to Europe in 1932 for a two-month hockey tour that saw them win 23 of 24 games against national teams across the continent.

The Legends will also pay tribute to the New England College men’s and women’s hockey programs.

Champions!
Congratulations to this year’s Champions. This year Lee Blossom, Ryan Sahr, JM Sahr and Scott Towle took home the title. They shot a 59 and bested the team of Greg McClary, Caleb Drouin, Ty Jordan and Colby Jordan on a match of cards. 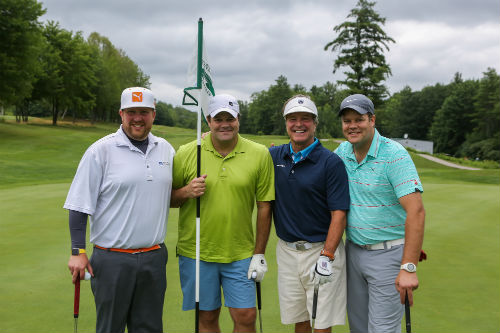 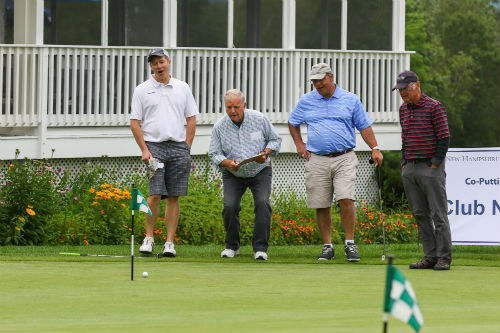 Shown above is keeper of the records, Dick Theriault (clipboard) and his assistant Wally Tafe far right with eventual champion Lane Mabbett (left) and Rich Mayara 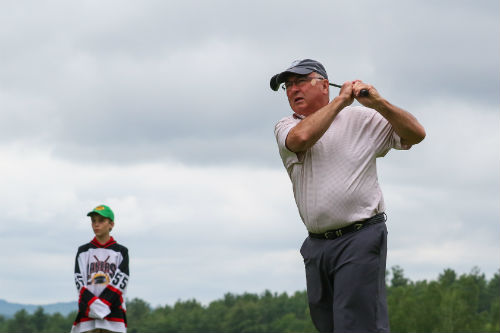 Ray Phelan has the perfect follow-through as Laconia Laker player Aidan McKenzie watches. Aidan and his father John McKenzie were there on “The Scott Citroni 4th Hole” along with board member Dave Beauchamp and his son Morgan. Proceeds from the 4th and 6th holes will be used to purchase equipment for families of need for Laconia Youth Hockey. In addition, the Lakers sent a foursome (Greg McClary, Caleb Drouin, Ty Jordan and Colby Jordan). 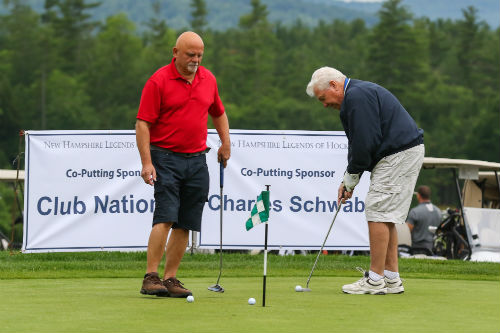 2017 Golf Photos
More than 500 terrific photographs were taken by Matt Parker Photography and are available to view and or purchase. Click here to view. If you have any questions contact Matt at mparker3011@gmail.com

2017 Induction Ceremony
NH Legends of Hockey Hall of Fame Induction Ceremony and Luncheon, honoring players, coaches, builders, and media representatives for their outstanding achievements and significant contributions to the sport of ice hockey in New Hampshire. If you’d like to join us and or sponsor this premier event, please contact Jim Hayes at hayes743@comcast.net 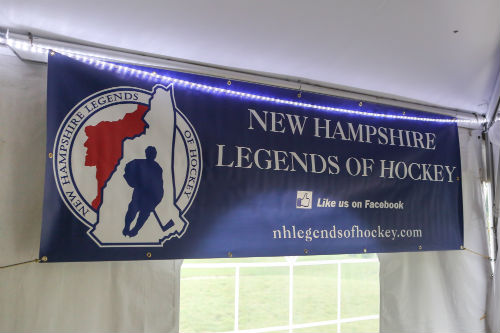 Golf Classic - One Week to Go

No Replies to "12th Annual Golf Classic Another Big Hit"